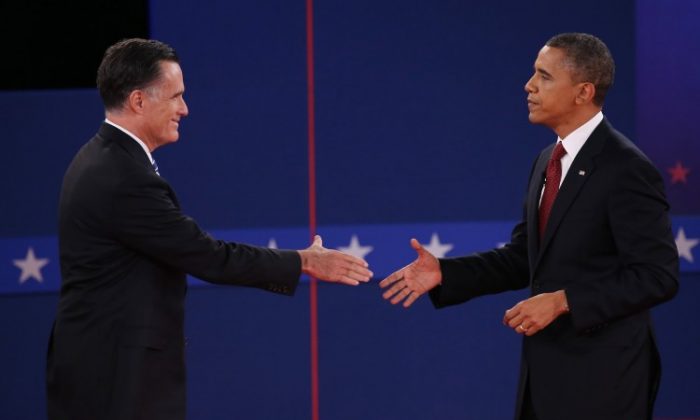 Obama, Romney Face Off in Florida

WASHINGTON—The presidential race between President Obama and Mitt Romney is tight and with less than 20 days to go, the third and last presidential debate Monday night will be critical for both candidates.

Dr. Craig Smith, a communications professor at California State University–Long Beach, believes with the race so close the two candidates will approach the third debate cautiously.

“It is going to be their last impression,” he said. “It is a big risk to go too far and push something.”

A lackluster performance from President Obama and a strong showing by his Republican opponent allowed Romney to gain the upper hand in the first debate. The president fought back in last week’s town hall debate, refuting Romney’s criticism of his administration and putting the two candidates on an even footing.

Nearly 66 million television viewers watched the second debate, around 1 million less than those that watched the first, according to Nielsen ratings.

With the race so tight the viewer numbers are expected to be high for Monday’s event, particularly when online and next day viewers are included.

While such a huge audience is an opportunity, each of the candidates will also be worried about causing an upset so close to the elections, says the University of Maryland’s Dr. Kathleen Kendall, a specialist in presidential campaign communication.

“They will also be especially careful not to make a huge mistake … and not to ruin things at the end because they will not have that size of an audience again to make things right,” she said. “So this puts a lot of pressure on them.”

The third debate, to take place at Lynn University in Boca Raton, Fla., will follow the same format as the first, with six 15-minute segments on prescribed topics.

Moderated by CBS News frontman Bob Schieffer, the debate will focus on foreign policy and five specific topics. Four of the segments will focus on the Middle East and conflict zones, two segments dedicated to The Changing Middle East and the New Face of Terrorism, and one each on Our Longest War–Afghanistan and Pakistan, and Red Lines–Israel and Iran.

A fourth segment will address the Asia-Pacific pivot in The Rise of China and Tomorrow’s World, and a fifth will allow the candidates to describe their view on America’s Role in the World.

In a statement announcing the topics, the Commission on Presidential Debates noted that no set order had been prescribed for the topics.

While foreign policy has been seen as one of the president’s strengths, Smith expects Romney to focus on Iran and the security of U.S. embassies, including the administration’s handling of the Sept. 11 attack on the U.S. Consulate in Benghazi, Libya.

“I think he can raise those points without being too pushy on them and score on foreign policy,” he said.

“If he can do that it is going to be damning for Romney,” he said.

According to Hudak Romney could turn the tables and accuse an Obama administration of continuing Bush policies, pointing to the president’s failure to close Guantanamo Bay and other detention facilities as promised.

“Who can really capitalize on the Bush issue may be something to look for,” he said.

Kendall says Americans are traditionally more interested in domestic issues rather than foreign policy, and the candidates will have an eye on areas that will appeal to strategic sectors of the community for their campaigns.

In Florida, an important swing state, a high Jewish and Cuban population may drive the direction of the debate toward Israel and Cuba. In Virginia, where the race is also tight and the military population high, the welfare of troops in Afghanistan will likely feature on the night.

“They will be making a great to effort to tie whatever they say about a country to what is happening here,” she said.

Despite the foreign policy focus, Hudak expects President Obama will be looking to use this final debate to elaborate further on his plans for the economy. A discussion on China and trade could enable him to spring board into more detail about his economic plans over the next four years.

“If he does that he is going to be really effective in filling in the blanks that he left open in the second debate,” he said.

Smith says that may be difficult to do with moderator Bob Schieffer, an experienced interviewer and host of CBS’s “Face the Nation,” who will be looking to keep the candidates on task.

Audiences do not like it when candidates go off topic and particularly when they avoid answering questions directly, he said. “I think you run a risk if you start mixing apples and oranges during a debate.”