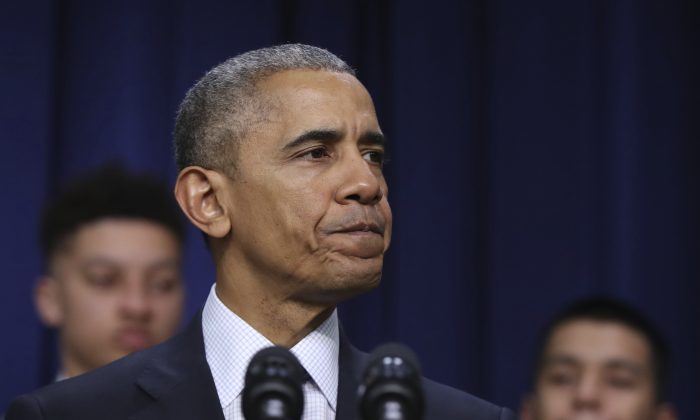 President Barack Obama during a "My Brother's Keeper" summit in South Court Auditorium at the Eisenhower Executive Office Building on the White House complex in Washington, on Dec. 14, 2016. (AP Photo/Manuel Balce Ceneta)
US

President Barack Obama says one of his missions after leaving office will be to develop a new generation of leaders on issues such as climate change, criminal justice reform, and expanding health insurance coverage.

In a wide-ranging interview with NPR, Obama said he wants to ensure that young people working on those issues have “whatever resources, credibility, spotlight that I can bring to help them rise up.”

Obama said in the interview airing Monday that the issues he cares most about will be well served when that new generation moves into positions of authority.

The Democratic Party has been hit hard during his presidency. He’ll leave with the GOP controlling the White House and Congress.

Obama said Republicans have been systematic in building from the ground up while Democrats have had a bias toward national and international issues.

“As a consequence I think we’ve ceded too much territory,” Obama said.

Obama said he leaves office with some ideas about how to build up the party, but he says he’ll serve more as an adviser, coach, and friend.

“I’m less likely to get involved in all the nuts and bolts of electioneering,” Obama said.

“What I am interested in is just developing a whole new generation of talent,” Obama added in the interview. “There are such incredible young people who not only worked on my campaign, but I’ve seen in advocacy groups,” Obama said. “I’ve seen passionate about issues like climate change, or conservation, criminal justice reform. You know, campaigns to—for a livable wage, or health insurance. And making sure that whatever resources, credibility, spotlight that I can bring to help them rise up. That’s something that I think I can do well, I think Michelle can do well.”