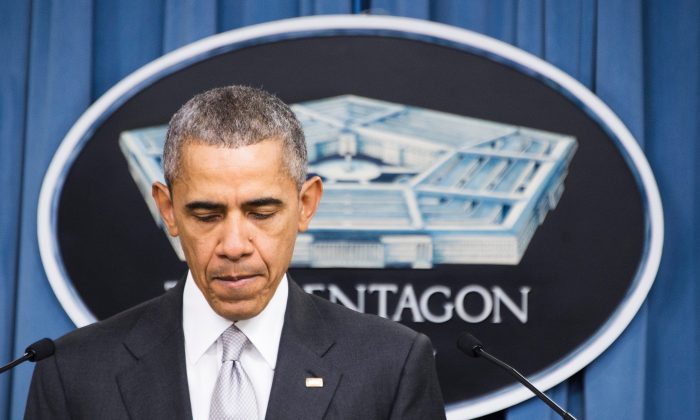 President Barack Obama after a National Security Council meeting on the counter-ISIS in Washington, D.C., on Dec. 14, 2015. (Jim Watson/AFP/Getty Images)
US

WASHINGTON—President Barack Obama on Monday vowed to accelerate the U.S.-led military campaign against ISIS in both Syria and Iraq, implicitly acknowledging that progress has been too slow as the extremist group expands its reach with deadly attacks beyond the Middle East.

Speaking at the Pentagon after meeting with his National Security Council, Obama revealed that a group of American special operations commandos has begun working with local fighters in Syria to “tighten the squeeze” on Raqqa, the extremists’ nominal capital. He cited this as an example of aggressive new action, in addition to an intensified bombing of the oil infrastructure in Syria that provides much of the revenue of the Islamic State in Iraq and Syria (ISIS), also known as ISIL.

The administration announced in late October that Obama had approved sending up to 50 special operations troops to Syria on the first open-ended mission by U.S. ground forces in Syria. Until now, U.S. officials had refused to say whether the American commandos had begun their mission.

Obama said his strategy is moving ahead with “a great sense of urgency,” an assertion that critics say belies the slow pace of progress in Iraq and Syria. Drawing an implied contrast with military prescriptions offered by Republican presidential candidates, including Ted Cruz’s call to “carpet bomb them into oblivion,” Obama said, “We have to be smart, targeting ISIL surgically, with precision” airstrikes while local forces do the ground combat.

On a conference call Monday with religious leaders, top White House officials pledged vigilance by the Justice Department in pursuing hate crimes and other civil rights violations, calling an attack on any faith an attack on all faiths. Obama’s aides were also holding separate meetings at the White House with Muslim leaders and with Sikh leaders.

Poll Finds Terrorism Top Issue in US Following Deadly Attacks
In Digital War Against ISIS, Speed and Counter-Narratives Are Missing

The president’s appearance at the Pentagon was part of a weeklong push to explain his strategy for stopping ISIS abroad and its sympathizers at home. Obama is scheduled to attend a briefing at the National Counterterrorism Center on Thursday. He noted that his defense secretary, Ash Carter, departed Monday for Turkey and the Middle East to seek more coalition military contributions to the counter-ISIS campaign.

He also sent Secretary of State John Kerry to Moscow to try to narrow gaps with Russia over a political transition to end Syria’s civil war.

The president’s string of terror-related appearances this week, shortly before Christmas, comes amid public jitters about the specter of extremism after deadly attacks in California and Paris. Seven in 10 Americans rate the risk of an attack in the United States as at least somewhat high, according to an Associated Press-GfK poll—a sharp increase from the 5 in 10 who said that in January. Just 28 percent in the survey said Obama had clearly explained the United States’ goals in fighting ISIS, while 68 percent said he had not.

Only a little over a week ago, Obama sought to allay concerns in an Oval Office address, but critics said his words failed to reassure.

“The American people are smart enough to know when something is working or not, and it’s obvious that the president’s current strategy isn’t working,” House Majority Leader Kevin McCarthy (R-Calif.) said in response to Obama’s appearance at the Pentagon.

Speaking with top military leaders at his side, including Gen. Lloyd Austin, the Central Command chief who is spearheading the counter-ISIS campaign, Obama cited a range of evidence that ISIS is weakening, including what he called instances of its fighters defecting and its territory shrinking. But he also acknowledged that recent terrorists attacks, including those in Paris and San Bernardino, illustrate the need to hit ISIS harder.

Notably, the military leaders appearing with Obama at the Pentagon included Gen. Joseph Votel, commander of U.S. Special Operations Command, whose forces are playing a bigger role in both Iraq and Syria. Earlier this month, Carter announced that Obama had approved sending to Iraq a “specialized expeditionary targeting force” to clandestinely conduct raids against ISIS leaders in Iraq and Syria and conduct other sensitive missions.

That deployment and numerous other adjustments announced in recent weeks are aimed at bolstering a military strategy under heavy fire from critics.

After a series of setbacks, the United States and its coalition partners have claimed progress recently in wresting back territory from ISIS and eliminating some of its key leaders in Syria and Iraq. The military has said that hundreds of U.S. airstrikes in recent weeks dealt a major blow to ISIS’s ranks in the western Iraqi city of Ramadi, which ISIS seized in May and which Iraqi soldiers have encircled as a step toward trying to recapture the provincial capital.