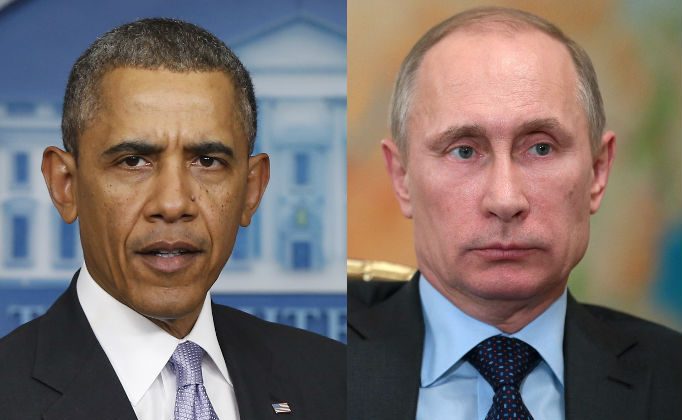 NEW YORK—Face-to-face for the first time in nearly a year, President Barack Obama and Russian President Vladimir Putin on Monday will confront rising tensions over Moscow’s military engagement in Syria, as well as the stubborn crisis in Ukraine.

Underscoring their deep differences, the U.S. and Russia couldn’t even agree on the purpose of the meeting, which will occur on the sidelines of an annual United Nations summit. The White House said it would focus on Ukraine and getting Moscow to live up to a fragile peace plan. The Kremlin said Ukraine would be discussed only if time allowed, with Syria and the fight against the Islamic State dominating the discussions.

Despite little sign of a breakthrough on either front, U.S. officials insisted it was still worthwhile for the leaders to meet — something that has happened rarely since Obama vowed to isolate Putin in retaliation for Russia’s provocations in Ukraine.

“The president believed it would be irresponsible to let this occasion in which the two leaders would be in the same city pass without trying to test to see whether progress could be made on these newly intractable crises,” Samantha Power, the U.S. ambassador to the United Nations, said Sunday on ABC’s “This Week.”

Ahead of their early evening meeting, Obama and Putin will each have a chance to make their case to a broader audience of world leaders gathered in New York for the United Nations General Assembly. Obama will address the body Monday morning, with Putin following shortly after.

Obama is expected to emphasize the need for a political resolution to Syria’s civil war that includes the ouster of President Bashar Assad, a Russian ally. Putin, meanwhile, is expected to argue that Assad’s military is the most capable force for fighting the Islamic State — the extremist group with key strongholds in Syria and Iraq — and therefore needs to be strengthened.

“There is no other solution to the Syrian crisis than strengthening the effective government structures and rendering them help in fighting terrorism,” Putin said in an interview with CBS’ “60 Minutes” that aired on the eve of his meeting with Obama.

Ahead of his U.N. visit, Putin deployed more weapons and troops to Syria. The Kremlin has also intensified its diplomatic efforts in recent months, launching a dialogue with Saudi Arabia, which is firmly bent on unseating Assad, and the Syrian opposition, in a renewed attempt to try to negotiate a political compromise.

In another development, Iraq’s military said Sunday it will begin sharing “security and intelligence” information with Syria, Russia and Iran to help combat the Islamic State group. The move could further complicate U.S. efforts to battle the extremists without working with Damascus and its allies.

Russia has shown no indication that it would dump its support for Assad, whom it has shielded from U.N. sanctions and continued to provide with weapons throughout the nation’s more than four-year civil war.

Putin’s calls for strengthening Assad’s military come amid striking troubles for Obama’s plan to train and arm moderate rebels to fight the ISIS in Syria. A $500 million Pentagon training program has resulted in just a handful of fighters to bolster airstrikes from a U.S.-led coalition.

The U.S. has agreed to talk with Russia about “deconflicting” their military action in Syria. U.S. Defense Secretary Ash Carter has spoken to his Russian counterpart about Syria earlier this month, the first military-to-military conversation in more than a year.

It will be hard for Moscow and Washington to reach any common ground on Syria beyond the military talks. Putin clearly has no intention of joining the U.S.-led coalition in Syria, which would mean accepting U.S. orders, and Washington has voiced concern that Russia is using its military presence in Syria to shore up Assad, whom it sees as the cause of the Syrian crisis.

Obama and Putin have long had a strained relationship and their body language in face-to-face meetings is always closely scrutinized for signs of tension. Their last formal meeting was in June 2013, though they’ve had a number of conversations on the sidelines of international summits, including in China last November.

The Ukraine crisis drove U.S.-Russian relations to post-Cold War lows. Russia annexed Crimea from Ukraine in 2014 and a pro-Russian armed insurgency continues in eastern Ukraine, with Kiev and NATO accusing Moscow of backing and supplying it.

A shaky peace deal for Ukraine was brokered in February by France and Germany, and Russia doesn’t want the United States to become engaged in those talks. Another four-way meeting of leaders of Russia, Ukraine, France and Germany is set to take place in Paris this weekend.

U.S. officials say Obama will stress to Putin the importance of local elections in Ukraine scheduled for late October going forward without interference.