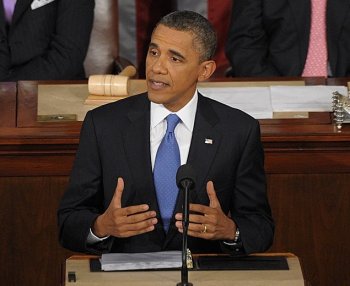 US President Barack Obama addresses a Joint Session of Congress about the US economy and job creation at the US Capitol in Washington, September 8. (SAUL LOEB/AFP/Getty Images)
US

By Clement Yang
Print
WASHINGTON—In his weekly Internet and radio address to the nation on Saturday, President Barack Obama once again urged Congress and the American people to lend support for the American Jobs Act.

In his address, Obama touted the benefits of his jobs plan, arguing that his proposals—which include tax cuts for both working families and business owners, and which he says will put teachers and constructions workers back to work—will create jobs and put the American economy back on the road to stability.

The president also called on Congress to “put country before party” and pass the American Jobs Act in the interest of the American people and the economy, while avoiding the partisan posturing and gamesmanship that had characterized the debt-ceiling debate.

“I know some [legislators] would rather wait another year to wage another election than work together right now. But most Americans don’t have the luxury of waiting. It was three years ago this week that a financial crisis on Wall Street made things much more difficult for working folks on Main Street. And too many are still hurting as a result,” said Obama.

“So the time for action is now. No more games or gridlock. No more division or delay.”

The president will officially unveil his plan for how he plans to pay for the American Jobs Act without increasing the deficit on Monday. The plan is expected to consist primarily of tax increases on the wealthiest Americans.

During the Bush administration, tax rates on the wealthiest were cut. The cuts were scheduled to expire in 2010, but were extended. According to the Annenberg Public Policy Center, “Last year, the nonpartisan Congressional Budget Office said that allowing the tax cuts to expire at the end of 2010 would decrease the deficit from $1.3 trillion in 2010 to $1.07 trillion in 2011.”

While congressional Republicans have indicated lukewarm acceptance for some parts of the president’s plan, they oppose the plan to pay for the bill by raising taxes and closing tax loopholes for wealthy Americans and corporations. They also believe that the current federal regulatory environment is hostile to business and hinders job growth.

House Republicans responded to the president’s jobs plan during their own weekly address, delivered by Rep. Peter Roskam (R-Ill.)

Roskam argued that excess and burdensome regulations were hindering job growth, and called on President Obama to adopt Republican initiatives for repealing such regulations.

“Washington has become a red tape factory, with more than 4,000 rules in the pipeline—hundreds of which would cost our economy more than $100 million each annually. The disappointing reality is that what may be a faceless regulation to most can have a profound impact on local economies and families like yours,” said Roskam, in the address.

The representative said such firms as Chicago White Metal Casting, a manufacturer in Roskam’s Illinois district; Boeing Company, the aerospace manufacturer and third largest defense contractor; and Gibson Guitars, a guitar manufacturer, were examples of businesses that have fallen victim to excess federal regulations.

The president first presented his jobs bill during a joint session of Congress on Sept. 8. He said the jobs plan will cut payroll taxes for both employers and workers, and will prevent layoffs of hundreds of thousands of teachers, firefighters, and policemen. It also includes provisions to encourage business hiring, such as a “returning heroes” tax credit for hiring veterans of the Iraq and Afghanistan wars.

The bill will also invest $50 billion in infrastructure projects such as roads, railways, and airports, and will establish a national infrastructure bank to leverage both private and public capital for maintaining and updating the nation’s dated infrastructure.