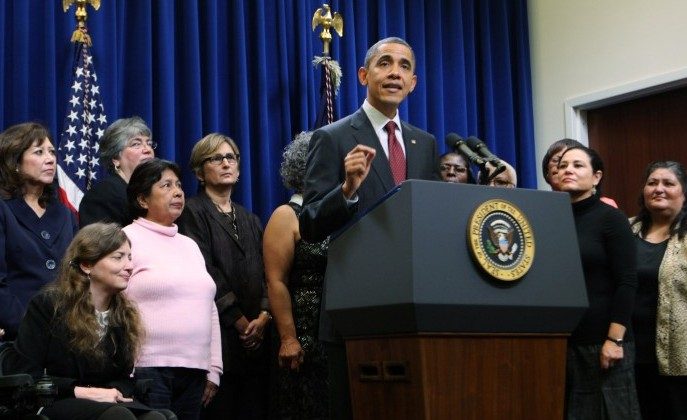 President Barack Obama speaks during a 'We Can't Wait Event' in the Old Executive Office Building Dec. 15 in Washington. Obama proposed new rules that would guarantee a minimum wage and overtime protection for home healthcare workers that take care of the elderly. (Dennis Brack-Pool/Getty Images)
US

“The nearly 2 million in-home care workers across the country should not have to wait a moment longer for a fair wage. They work hard and play by the rules and they should see that work and responsibility rewarded,” said President Barack Obama, according to a White House press release. “Today’s action will ensure that these men and women get paid fairly for a service that a growing number of older Americans couldn’t live without.”

The announcement received outspoken support from labor unions. “For the working women and men who care for our aging parents, our sisters, brothers and neighbors, ‘invisible no more’ is not a simple slogan, it is an undeniable call to action,” said Service Employees International Union (SEIU) President Mary Kay Henry, in a statement.

The revised Labor Department rules would protect the nearly 2 million in-home care providers in the United States. According to the White House, this category was originally meant to apply to casual babysitters, not, “workers whose vocation was in-home care service, and who were responsible for their families’ support.”

Most workers in the United States are covered under the Fair Labor Standards Act (FLSA), which covers basic wage protections including minimum wage and time-and-a-half pay for overtime hours. There are some exceptions to this policy, including what have been called “companions” to the elderly, this definition to date has applied to in home care workers.

Public attention was brought to the issue when the Supreme Court ruled in 2007 that Evelyn Coke was not entitled to overtime pay under current regulations. Coke had sued her employer Long Island Care for more than 20 years of unpaid overtime. She said before her death in 2009, “I worked for 20 years taking care of people—making sure they had a warm bath or a hot meal—so they could have a decent life at home.

“Isn’t that work important? By the wages, you wouldn’t think we do an important job, but home care workers help people stay at home, close to their families. In some cases, we are their family,” Coke said.

Four years ago then presidential candidate Obama spent a day with in-home care worker Pauline Beck. Beck was at the White House today, when Obama announced his proposed changes.

“The care provided by in-home workers is crucial to the quality of life for many families,” said Secretary of Labor Hilda L. Solis. “The vast majority of these workers are women, many of whom serve as the primary breadwinner for their families. This proposed regulation would ensure that their work is properly classified so they receive appropriate compensation and that employers who have been treating these workers fairly are no longer at a competitive disadvantage. “