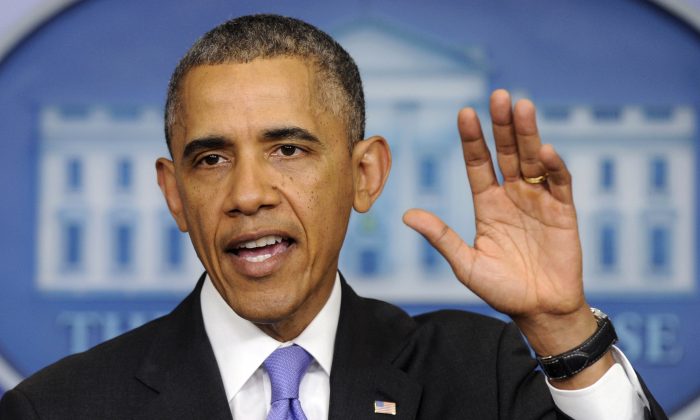 FILE - In this May 21, 2014, file photo, President Barack Obama speaks in the Brady Press Briefing Room of the White House in Washington, about veterans health care. A review of the Veterans Affairs health care system by a top White House aide has concluded that there are "significant and chronic systemic failures" that the VA's leadership must address. A summary of the review by deputy White House chief of staff Rob Nabors says the Veterans Health Administration must be restructured and that a "corrosive culture" has hurt morale and affected the timeliness of health care. (AP Photo/Susan Walsh)
Social Media

The bogus report was posted on National Report, a “satire” news website.

The website has a disclaimer that has since been taken down. “DISCLAIMER: National Report is a news and political satire web publication, which may or may not use real names, often in semi-real or mostly fictitious ways,” it said.

“In a proclamation issued today, President Obama has designated August as “International Muslim Awareness Month,'” the fake article reads. “Obama told reporters about his current plans for helping Muslims around the world. ‘August is not the only month of the year to celebrate the Muslim community. With a little bit of effort we can work every day to help these people achieve greatness. So beginning next week I will personally be working with Congress to make it easier for Muslims to become American citizens,’ Obama said.”

MINNEAPOLIS (AP) — Over two days, President Barack Obama took in two of Minnesota’s most scenic parks all while he talked about how ugly Washington had become. Obama headed back to Washington on Friday after his stay in Minneapolis, where he spoke extensively about how gridlock has stymied economic progress. Here are some takeaways:

Obama said he wanted to take a pulse of Americans and their views about the state of the economy.

An invitation-only town hall Thursday and a ticketed speech Friday weren’t exactly a representative sample, but it’s clear Obama isn’t alone in his gripes about Washington.

“I know that our politics looks profoundly broken, and Washington looks like it’s never going to deliver for you. It seems like they’re focused on everything but your concerns,” Obama said during an economic policy speech on the shores of Lake Harriet, telling people to urge Congress to rally around “economic patriotism.”

Nonprofit executive Norm Munk, a self-identified Democrat, was among those quick to defend Obama as trying to get important legislation moving.

“He’s forged ahead,” said Monk, who voiced concern that future generations could pay the price for inaction. “For kids, my children, it’s tough. It’s the generation that’s not doing better for the first time in history.”

Obama’s swing came about four months before the midterm election in which his party is at risk of ceding ground.

Minnesota Democratic officials say they hope Obama’s appearance can inspire voters who might otherwise sit the election out. State Democrats say they can’t afford the typically steep drop-off in Democratic votes in nonpresidential years if they expect to retain the governor’s office, a Senate seat, five seats in Congress and control of the state House.

U.S. Rep. Keith Ellison, a Minneapolis Democrat who isn’t seen as at risk, said party mobilizing and emphasizing bread-and-butter issues like Obama did will be instrumental in re-electing Sen. Al Franken and Gov. Mark Dayton.

Franken joined Obama during only a limited portion of the president’s Minnesota visit, in an unpublicized tour of a suburban workforce center Friday.

“It was a good visit, and I’m pleased the president is making this a national priority,” Franken said in a prepared statement.

After that tour, Franken headed north to Duluth for a memorial service for former Rep. Jim Oberstar. Franken didn’t attend the town hall event Thursday at Lake Minnehaha or the lakeside speech Friday.

Franken spokeswoman Alexandra Fetissoff said the White House told the senator that logistically he could attend either the workforce center tour or speech, but not both.

Republicans are criticizing Franken as being too cozy with Obama when it comes to policy, such as the nation’s new health law. A political group known as the Heartland Campaign Fund is driving that point home in an ad launched in conjunction with Obama’s Minnesota trip showing the president and Franken on the same screen.

Sen. Amy Klobuchar and Dayton spoke to the crowd before Obama at Friday’s event.