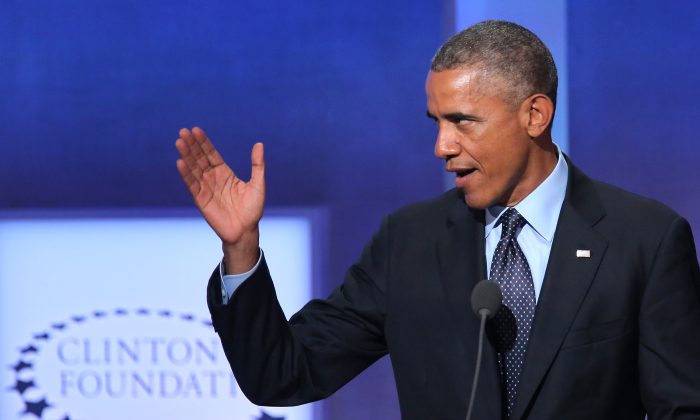 One apparent beneficiary of that policy was Gehad el-Haddad, a Muslim Brotherhood operative who worked at the Clinton Foundation in Egypt for five years. After the regime he was part of was overthrown, the Islamic terrorist leader received a life sentence in Egypt for sedition.

Haddad is not the only Clinton Foundation employee tied to the Muslim Brotherhood, a transnational Sunni Islamist organization.

Hillary Clinton’s top aide, who in recent years has followed her from job to job, is Huma Abedin. Abedin worked in the Bill Clinton-era White House and for Hillary Clinton at the State Department. She also worked at the Clinton Foundation and helped to run Hillary Clinton’s presidential campaign. As previously reported, Abedin has generational ties to Islamic terrorism and to the Muslim Brotherhood in particular.

Hillary Clinton served as secretary of state in Barack Obama’s Cabinet from Jan. 21, 2009, to Feb. 1, 2013. The so-called Arab Spring and the Egyptian Revolution of 2011 that removed longtime U.S. ally and anti-Islamist Hosni Mubarak from power in Egypt, and cleared the way for the brutal Islamic supremacist Mohamed Morsi to become Egypt’s head of state, took place on her watch and while Haddad worked for the Clinton Foundation.

The U.S. Department of Justice launched a fresh inquiry earlier this year into whether the Clinton Foundation participated in pay-to-play politics while Hillary Clinton headed the Department of State, The Hill newspaper reported at the time.

But the question remains: Did officials at the Clinton Foundation know about Haddad’s radical, anti-American political affiliations? We may never know with perfect certainty. Several messages seeking comment from the foundation’s headquarters in New York City went unanswered.

No official investigations of Haddad, or of the extent to which the Muslim Brotherhood penetrated the Clinton Foundation, appear to have been conducted in the United States.

This doesn’t surprise Clare Lopez, vice president for research and analysis at the Center for Security Policy, a think tank in Washington.

Both the Clinton Foundation and the Obama administration worked closely with the Muslim Brotherhood, Lopez said, and none of this was investigated.

“It was U.S. policy at that time to support the Muslim Brotherhood both domestically and abroad. The Obama administration was riddled with such influences,” Lopez said.

In 2010, Obama and Clinton laid out their policy of support for the Muslim Brotherhood in a still-classified document titled “Presidential Study Directive-11,” or PSD-11. The objective of the policy, according to leaks, was to help the Muslim Brotherhood come to power in Tunisia, Libya, Syria, and Egypt. In a March 6, 2011, Washington Post column, David Ignatius wrote, “This is the president as global community organizer—a man who believes that change is inevitable and desirable, and that the United States must align itself with the new forces shaping the world.”

He had been the principal English-language spokesman for the Muslim Brotherhood, a position he claims to still hold despite his current confinement. Even now, Haddad is trying to create the conditions needed for his group to return to power in Egypt, after its allies were ousted by the Egyptian military in a popular coup in mid-2013.

The New York Times published an op-ed on Feb. 22, 2017, bearing Haddad’s byline. In it, he was identified as “the official spokesman for the Muslim Brotherhood.” He denied the group was a terrorist organization, claiming it was “a morally conservative, socially aware grass-roots movement that has dedicated its resources to public service for the past nine decades.”

Haddad was one of more than 35 Islamist defendants to receive a sentence of life imprisonment for anti-government activities from an Egyptian court in April 2015. Haddad reportedly sought to spread chaos across Egypt, in defiance of the government, that replaced the now-deposed Egyptian President Mohamed Morsi, who was backed by the Muslim Brotherhood, as well as then-U.S. President Obama. Morsi, like Haddad, remains imprisoned, and the briefly legal Muslim Brotherhood is once again banned in the Arab republic.

Back in his Clinton Foundation days, Haddad served as “city director,” a senior communications position at the charity, from August 2007 to August 2012.

The Clinton Foundation’s Climate Initiative, on which he worked, “taught Haddad about managing [a nongovernmental organization] and the role that civil society takes between the state and private sector, lessons he is applying to the Renaissance Project,” according to the online newspaper Egypt Independent.

But in his final year at the Clintons’ eponymous charity, Haddad also simultaneously worked for the Muslim Brotherhood and the Egyptian political party it backed.

Haddad “officially became a senior adviser for foreign affairs in Morsi’s Freedom and Justice Party in May 2011, when he was still claiming to be employed by the Clinton Foundation,” the news website reported.

Haddad’s time at the Clinton Foundation “overlapped with his official work for the Muslim Brotherhood, which began in Cairo in February 2011 when he assumed control of the Renaissance Project, a Brotherhood-backed economic recovery program.”

Despite the innocuous description of the Renaissance Project, Egyptian media have reported it is actually a program aimed at implementing the radical Islamization of Egyptian society.

“Renaissance is far more than the electoral program of President Mohamed Morsi or the Brotherhood’s political wing, the Freedom and Justice Party,” the Egypt Independent reported. “It is a 25-year project to reform state, business and civil society, rooted in the Brotherhood’s Islamic values but conditioned by the experiences of the project’s founders in the modern economy.”

A month after Haddad left his Clinton Foundation job for a full-time position with the Brotherhood in 2012, then-President Morsi was invited to make a major address at the Clinton Global Initiative (CGI), a high-profile project of the foundation. Morsi gave the speech on Sept. 25, 2012, at a CGI conference in New York City.

Matthew Vadum is an award-winning investigative journalist and recognized expert in left-wing activism. He is the author of “Subversion, Inc.”