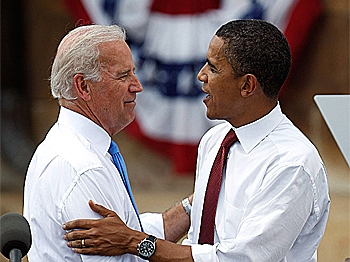 The move comes as little surprise to most Democratic experts and strategists, as they say that the veteran Senator brings to the ticket, foreign policy experience and blue-collar appeal.

Leaked reports of Obama’s choice were disclosed several hours before Obama’s campaign informed Obama supporters via text message at 3 a.m. Saturday morning. Obama and Biden held a rally in Springfield, Illinois on Saturday afternoon for the formal announcement of the Obama-Biden ticket.

During Saturday’s rally, Obama and Biden were quick to contrast themselves with the portrayal of the McCains as living lavish lifestyles. Just days earlier, McCain admitted in an interview that he didn’t know how many houses he owned. Various news agencies such as Newsweek and Politico have put the number at approximately seven or eight.

Biden jumped right into the Presidential fight atmosphere, jabbing at McCain’s “number of houses” blunder. While most Americans, like him, will worry about how to pay the bills, Biden said, McCain will “have to figure out which of the seven kitchen tables to sit at.”

With Biden, Obama hopes that he can win the votes of the blue-collar voters that he has not been attracting, and prevail in the battleground state of Pennsylvania.

With Biden, Obama gains instant credibility in having an experienced Washington insider who is an expert on international affairs, but also risks the impression that he is shying away from the “change” he so adamantly pushes for.

Obama has said several times in his speeches and rallies that by being an “outsider,” he can bring new insight to Washington that isn’t entrenched in the current Washington mindset. But it seems Biden is everything he isn’t.

Still, Obama has tried to distance Biden from Washington “insiders” who don’t fit his definition of change. “Joe Biden…has brought change to Washington, but Washington hasn’t changed him,” Obama said.

Biden bashed McCain and his policies on Saturday; blasting what he said was the Arizona Senator’s loyalty to Bush’s economic and foreign policies.

“I'll say straight up to you — John McCain, and the press knows this, is genuinely a friend of mine,” Biden conceded, “but the harsh truth is…you can't change America when you supported George Bush's policies 95 percent of the time…you can't change America when you know your first four years as president will look exactly like the last eight years of George Bush's presidency.”

The ad compiles quotes from Biden in the past that has been critical of Obama and favorable to McCain.

“What does Barack Obama’s running mate say about Barack Obama?” the ad begins. When asked about statements that Obama isn’t ready for the presidency, Biden replies, “I think I stand by the statement.”

In another clip, Biden is shown on Comedy Central’s The Daily Show with Jon Stewart saying, “John McCain is a personal friend, a great friend, and I would be honored to run with or against John McCain, because I think the country would be better off.”

“There has been no harsher critic of Barack Obama’s lack of experience than Joe Biden,” the McCain campaign reiterated in a statement. “Biden has denounced Barack Obama’s poor foreign policy judgment and has strongly argued in his own words what Americans are quickly realizing—that Barack Obama is not ready to be President.”

Meanwhile, Obama supporters are pointing to Biden’s criticism as evidence that Obama is upholding his vow not to surround himself with “yes-men.”

"I want somebody who's independent, somebody who can push against my preconceived notions and challenge me so we have got a robust debate in the White House," Obama said before announcing Biden as his running mate.