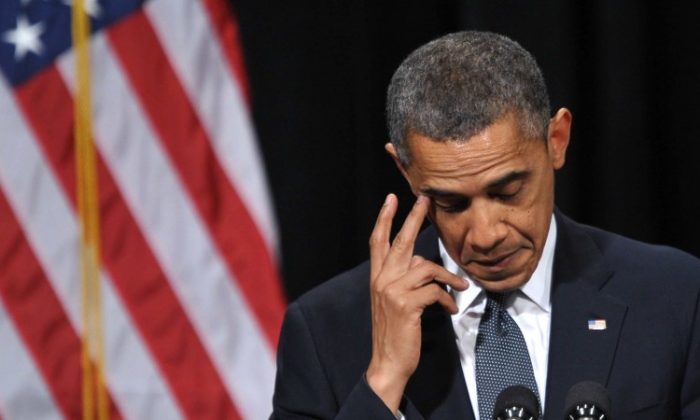 People mourn as they listen to President Barack Obama give a speech at an interfaith vigil for the shooting victims from Sandy Hook Elementary School on Dec. 16, 2012, at Newtown High School in Newtown, Conn. (Stephen Dunn-Pool/Getty Images)
US

Obama on Tragic Shooting: “Newtown, You Are Not Alone”

“I come to offer the love and prayers of a nation. I am very mindful that mere words cannot match the depths of your sorrow, nor can they heal your wounded hearts,” the president stated in his opening remarks.

Earlier in the day, Obama visited with families who lost loved ones, including the parents of children killed in Friday’s shooting.

“Whatever portion of sadness that we can share with you to ease this heavy load, we will gladly bear it. Newtown, you are not alone,” the president said at Sunday evening’s vigil.

The Connecticut school shooting on Friday at Sandy Hook Elementary shocked the nation and left many deeply pained, as Americans learned over the weekend that 20 children—ages 6 and 7—were killed, as well as were 6 teachers and staff.

The suspected shooter, identified as Adam Lanza, killed his mother before heading to the school Friday. He also took his own life, bringing the death toll to 28.

Over the weekend, the town held candlelight vigils and group prayers, and counseling has been made available. Support has been pouring in from across the country as families and townspeople try to cope with the tragedy.

On Saturday night, Robbie Parker, father of six-year-old Emilie Parker who was slain in the shooting, gave a televised statement. Doing his best to maintain composure amidst unimaginable grief, Parker reminded the world to be more compassionate toward others as he shared heartfelt memories of his daughter.

“She was the type of person that could just light up the room,” Parker said. “She always had something kind to say about anybody.”

Just one day after losing his daughter, Parker displayed remarkable compassion toward the family of suspected shooter Lanza.

“It’s a horrific tragedy, and we want everybody to know that our hearts and our prayers go out to them,” he said. “This includes the family of the shooter. I can’t imagine how hard this experience must be for you, and I want you to know that our love and our support goes out to you as well.”

Gov. Dan Malloy (D-Conn.) also spoke at Sunday’s vigil, saying that throughout the coming winter, each time the snow falls he will think of those 27 souls. He added that winter is followed by spring, and when the flowers bloom, “I will know that we are in touch” with those lost.

“We will go on. We will find strength. We will move on,” the governor said.

President Obama praised the community for its resolve. “As a community, you inspired us,” Obama said. “In the face of unconscionable evil, you cared and loved for one another. This is how Newtown will be remembered.”

The president also voiced deep concern for the violent tragedies occurring during his term, stating that this is the fourth time he’s had to grieve a mass shooting since the beginning of his presidency.

This leaves the country with some tough questions. “We can’t tolerate this anymore. These tragedies must end. We must change,” the president said.

The remarks were forecasting what is sure to be a political debate on gun rights and gun control, and it may extend to mental health issues and the culture of violence found in movies, television, and video games.

In the wake of the mass shooting, the National Association of School Psychologists (NASP) recommended that certain steps be taken.

Adults should “model calm and control” and “avoid appearing anxious or frightened,” according to the NASP website. “Reassure children that they are safe,” and “remind them that trustworthy people are in charge.”

Also, “it is okay to feel upset,” and adults should explain to children “that all feelings are okay when a tragedy like this occurs. Let children talk about their feelings and help put them into perspective.”

“Even anger is okay, but children may need help and patience from adults to assist them in expressing these feelings appropriately,” recommends NASP.

President Obama added his own recommendations Sunday night, saying that our time on earth is fleeting, and that fame and wealth and earthly passions do not last. He said that love and acts of kindness should drive forward everything we do while on the earth.

With additional reporting by Jim Fogarty.