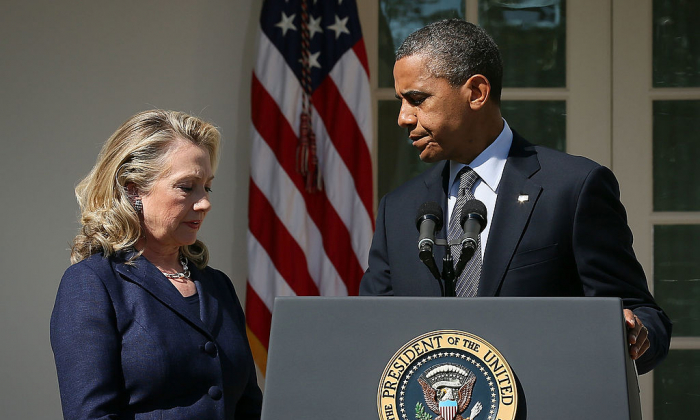 U.S. President Barack Obama (R) makes a statement in response to the attack at the U.S. Consulate in Libya as Secretary of State Hillary Clinton (L) looks at the Rose Garden of the White House in Washington on Sept. 12, 2012. (Alex Wong/Getty Images)
Trump Presidency

A high-ranking official at the Department of Justice under President Barack Obama attempted to shut down the FBI investigation on the Clinton Foundation while Hillary Clinton was running for president in 2016, according to a report by the Justice Department’s Office of Inspector General.

The revelation is part of a report on former FBI Deputy Director Andrew McCabe that led to his firing in March. McCabe told investigators that on Aug. 12, 2016, he received a call from the principal associate deputy attorney general, who “expressed concerns about FBI agents taking overt steps in the Clinton Foundation investigation during the presidential campaign.”

“Are you telling me that I need to shut down a validly predicated investigation?” McCabe fired back.

McCabe described the conversation as “very dramatic” and told the inspector general’s office that he “never had a similar confrontation” in his entire FBI career.

Are you telling me that I need to shut down a validly predicated investigation?
— Andrew McCabe, former deputy director, FBI

Although he is not named in the OIG report, Matthew Axelrod was the principal associate deputy attorney general at the time. Axelrod was fired along with his boss, Deputy Attorney General Sally Yates, shortly after President Donald Trump assumed office.

Axelrod was “one of DOJ’s highest-ranking officials and a member of the senior leadership team,” according to his profile at the Linklaters law firm, where he is a partner.

“Matt also took the lead in advising on crisis management within DOJ, working closely with the White House, Congress, the FBI, and the media on DOJ’s most sensitive and high-profile matters,” the profile says.

McCabe authorized a leak to The Wall Street Journal about his conversation with Axelrod. In the resulting article, Axelrod was described as being “very pissed off” when asking why the FBI “was still chasing a matter the department considered dormant.”

When McCabe asked if he is being told to shut down the investigation, Axelrod replied, “Of course not.”

The two senior FBI officials whom McCabe authorized to leak to the Journal were Peter Strzok and Lisa Page. Text messages sent between Strzok and Page revealed that they were extremely biased against Trump. Strzok was the top investigator in the Clinton email case and was later part of the special counsel probe into allegations of collusion between the Trump campaign and Russia. Strzok was removed when the texts became public.

On April 18, 11 congressmen referred McCabe’s case to the FBI and DOJ for criminal investigation. The lawmakers say that there is evidence that McCabe lied to his boss and investigators about the leak.

McCabe’s boss at the time, former FBI Director James Comey, is himself under investigation for leaking classified information to The New York Times via a friend.