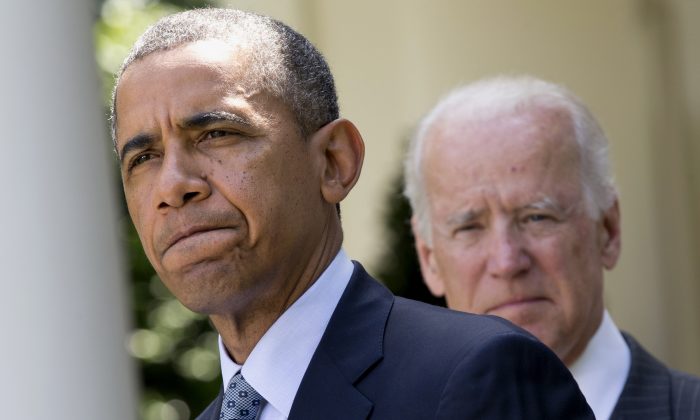 President Barack Obama, accompanied by Vice President Joe Biden, pauses while making an announcement about immigration reform, Monday, June 30, 2014, in the Rose Garden of the White House in Washington. The president said he's done waiting for House Republicans to act on immigration. He says he now plans to act on his own. Obama announced his intention Monday to take executive action. (AP Photo/Jacquelyn Martin)
Social Media

An article saying President Barack Obama will visit a mosque and meet with Muslim leaders on Independence Day isn’t real.

The fake report was published on National Report, a self-described “satire” website that features a number of false political articles. The website posts articles that try to rile up conservatives and Republicans.

According to a since-removed disclaimer, the National Report doesn’t publish real stories. “DISCLAIMER: National Report is a news and political satire web publication, which may or may not use real names, often in semi-real or mostly fictitious ways,” it says.

Last year, the National Report posted an article saying Wyoming residents would be RFID chips implanted in them due to an Obamacare mandate.

The publisher of the National Report, Allen Montgomery, spoke with the Wyoming Star-Tribune last year during the RFID hoax.

He said he’s trying to invoke an emotional reaction from the reader.

“We have been targeting Tea Party types recently as they are the most gullible and are willing to spread misinformation across the internet with little/no research,” he told the Star-Tribune last year.

“It is our opinion that if a person is too lazy to check for multiple references [or at least one other source] … and they spread misinformation around as fact, then they are to blame for their own stupidity, not us,” he added.

On Facebook and Twitter, a number of people reacted strongly to the Obama-mosque article. A few conservative websites and blogs picked it up as well under the impression that it’s a real story.

“This man will not stop until we are all wearing burkas and praising Allah!” one person wrote.

However, National Report also appears to post fake comments–usually via other author’s accounts–on their site to rile users up even more.