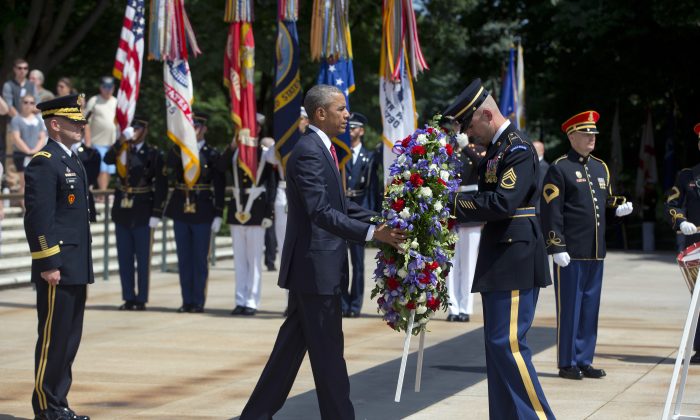 President Barack Obama lays a wreath at the Tomb of the Unknowns, on Memorial Day, Monday, May 30, 2016, at Arlington National Cemetery in Arlington, Va. (AP Photo/Pablo Martinez Monsivais)
US

ARLINGTON, Va.—President Barack Obama laid a wreath Monday at the Tomb of the Unknowns to honor members of the military who died serving their country.

Obama’s appearance at Arlington National Cemetery carries on a longstanding presidential tradition and comes as the U.S. struggles to end various conflicts in the Middle East.

In his remarks, Obama called for Americans to honor the fallen by caring for those they leave behind — their families and their battle buddies who come home.

“We need to be there not just when we need them, but when they need us,” Obama said of the nation’s veterans.

Obama said 20 members of the armed forces had died in combat within the last year.

Special operations forces continue to serve in dangerous missions in Syria, Iraq and Afghanistan, even as the U.S. military presence in the latter two countries has been greatly reduced under Obama’s watch.

The focus in Iraq and Syria is on defeating the Islamic State group. In Afghanistan, U.S. troops work with Afghan forces battling the Taliban.

Prior to traveling to Arlington, Obama held a breakfast reception at the White House for family members of fallen service members and veterans groups.