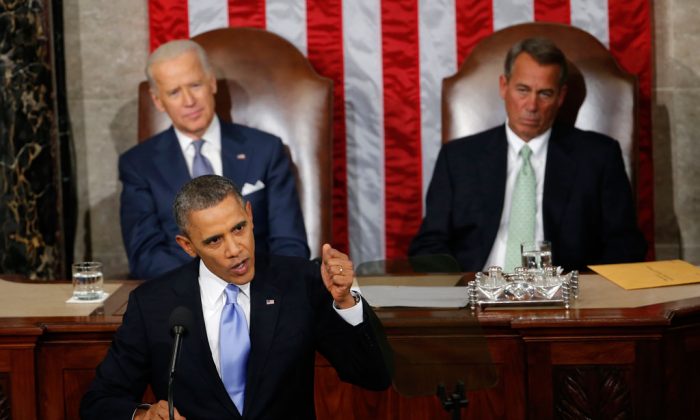 Vice President Joe Biden and House Speaker John Boehner of Ohio listens as President Barack Obama gives his State of the Union address on Capitol Hill in Washington on Jan. 28, 2014. Away for more than half a month, President Barack Obama returns to the White House this weekend aiming to set the agenda for the new year solely on his terms. He’ll face newly emboldened Republicans who feel their victory in last year’s midterm elections give them a mandate to rein the president in. (AP Photo/Charles Dharapak)
Politics

HONOLULU—President Barack Obama plans new steps to help more Americans buy a home and attend college, part of a 2015 agenda he hopes can build on the post-election momentum from high-profile moves on immigration and Cuba.

His approach for the new year appears to look straight past newly emboldened Republicans who take full control of Congress on Tuesday.

Fresh from a two-week Hawaiian vacation, the president was readying executive actions and legislative proposals to start promoting right away while advisers and speechwriters flesh out the broad themes that Obama wants to emphasis in his State of the Union address on Jan. 20. It will be his seventh since taking office, but his first before a Congress entirely in GOP hands.

In a sign of their divergent paths, Obama was heading out of Washington on Wednesday just as the new Congress was settling in. He plans stops in Michigan, Arizona and Tennessee aimed at highlighting how his own economic policies were contributing to the country’s recovery.

Obama, expected back in Washington on Sunday, has appeared energized by the end-of-the-year action on immigration policy and Cuban relations, suggesting continued presidential relevance despite a political landscape dramatically altered by deep Democratic losses on Election Day.

Since the November midterms, the key question has been whether Obama will lean in or away from compromise with Republicans in his final two years. Of the issues the White House said Obama will emphasize in the coming weeks, none was among the few areas that both Democrats and Republicans have cited as ripe for dealmaking — trade, taxes, public works.

An Obama spokesman, Eric Schultz, said Obama would announces proposals this coming week that focus on helping the middle class benefit from the economic recovery.

“There are a number of issues we could make progress on, but the president is clear that he will not let this Congress undo important protections gained — particularly in areas of health care, Wall Street reform and the environment,” Schultz said.

Obama has threatened to use his veto power to block GOP attacks this year.

In Detroit on Wednesday, Obama plans to cite the return of manufacturing jobs and his decision to bail out the auto industry. In Phoenix the next day, Obama intends to showcase gains in the housing sector since the real estate crash and come out with new steps to help Americans buy a home, the White House said.

With Obama’s prime-time address to the nation less than three weeks away, the White House has reached out to Democratic groups such as the Center for American Progress to solicit input, without making commitments.

Lacking a Democratic majority in the Senate to stop them, GOP lawmakers convening Tuesday intend to start chipping away on health care, immigration and the environment, flashing their power as Obama enters the last years of his presidency and the 2016 race starts to unfold.

Rep. Rodney Davis, R-Ill., said the House would start right away with jobs bills that have won the support of both parties before but never advanced in the Senate.

“If the president is willing to work with us, we’ll have a real chance to address our nation’s most pressing challenges,” he said in the weekly Republican address.

During his vacation with his wife and daughters, Obama spent long afternoons on the beach with his girls and golfed nearly every day with friends. The visit to his birthplace is a yearly tradition for the Obamas.