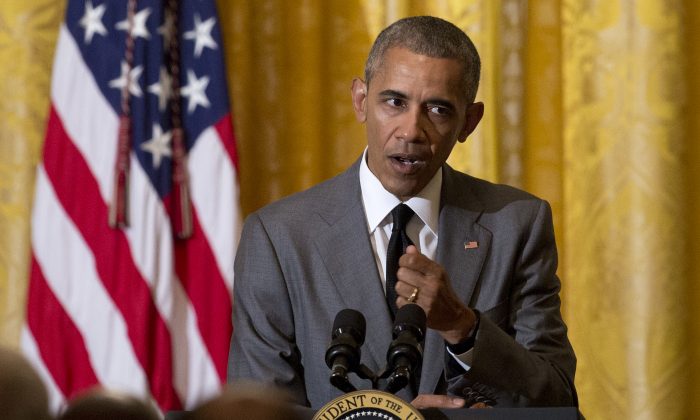 President Barack Obama speaks about the attack in Nice, France, on July 15, 2016, during a Diplomatic Corps Reception in the East Room of the White House. (AP Photo/Carolyn Kaster)
Politics

WASHINGTON  — The loss of three more police officers in Baton Rouge over the weekend demonstrates the importance of the federal government doing everything it can to help police officers go home at night and be safe, President Barack Obama said Tuesday after meeting with key leaders of his domestic security team.

Obama said there is great interest among police departments nationwide in receiving additional training to deal with active-shooter events and to decrease tensions before violence occurs, but that more resources will be necessary. He said many police departments could also use more help purchasing bullet-proof vests. He did not discuss specific amounts that he would like to see Congress make available.

Obama met with Attorney General Loretta Lynch, FBI Director James Comey and Homeland Security Secretary Jeh Johnson in the Oval Office. He addressed reporters for about five minutes after the meeting without taking questions. He said the federal government has many of the tools necessary to help local departments, but the effort to improve policing will also have to be driven within those departments.

“Unfortunately, not all the departments that want to train their officers have the resources to do it,” Obamasaid.

Obama said his intention over his remaining months in office is to continue to look at best practices and listen to departments and build up trust with local communities. He said there is no contradiction between making sure police have all the tools they need to do their job safely and in building trust between police and the communities they serve.

“This is not something that we’re going to be able to do solely from this office,” Obama said. “… This is something that is going to have to be bottom up and not just top down.

Earlier Tuesday, the White House released an open letter Obama penned to police departments. He said the nation will get through the recent killings of police officers with the “love and empathy of public servants” like the ones who were targeted in recent days.

The letter was dated Monday, the day after two police officers and a sheriff’s deputy were killed in Baton Rouge, Louisiana, after being ambushed by a lone gunman. Baton Rouge is where police on July 5 fatally shot Alton Sterling, a 37-year-old black man outside a convenience store. Sterling’s death sparked nationwide protests.

Sunday’s law enforcement deaths followed the July 7 sniper killings of five Dallas police officers as they guarded a peaceful protest. On Tuesday, an officer with the Kansas City, Kansas, police department died after he was shot in his car as he was approaching people matching the description of suspects in an earlier shooting.

Obama has said nothing justifies attacks on law enforcement, a sentiment he reiterated in the two-page letter. The Fraternal Order of Police posted the letter on its social media sites.

Obama wrote the letter as he remains under intense criticism from some police officials and others who accuse him of fostering a climate that has led to the intentional killing of law enforcement officers.

The White House has also been resisting pressure to illuminate the building in blue light in a show of support for law enforcement. Spokesman Josh Earnest has said such a step was unlikely while noting the president’s steady outreach to and support for police and other law enforcement over the past couple of weeks.

Obama telephoned the families of the Baton Rouge officers on Monday to offer his and the first lady’s condolences. Last week, he paid tribute to the Dallas officers at a memorial service there. He also met a couple of times with law enforcement officials and others, and fielded questions during a televised town hall on race in America.