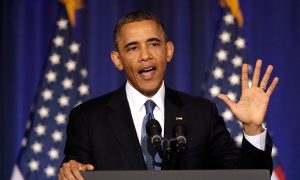 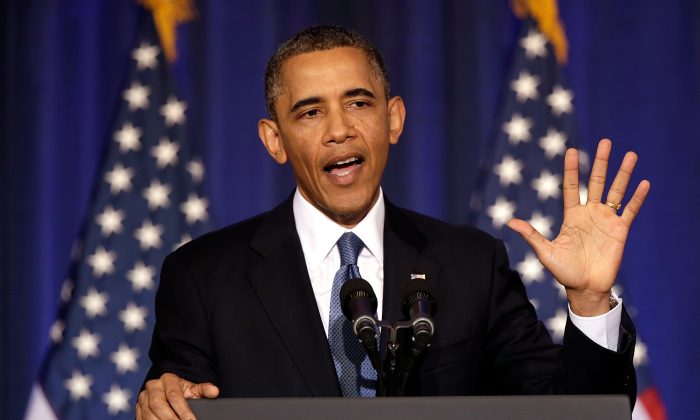 The May 23 speech has opened debate on the most controversial aspects of his counterterrorism strategy, with critics on one side accusing him of not going far enough, and on the other, of retreating from the fight on terrorism.

Speaking at the National Defense University in Washington, D.C., Obama said the threat from terrorism has changed and requires a rethink of the past strategy.

“America is at a crossroads,” he said. “We must define the nature and scope of this struggle, or else it will define us.”

The core of al-Qaeda in Afghanistan and Pakistan “is on the path to defeat,” he said. While he acknowledged that al-Qaeda affiliates, unrest in Arab countries, and homegrown terrorism represent new threats, he said that the United States has to remove itself from the idea of a perpetual war.

“Our systematic effort to dismantle terrorist organizations must continue. But this war, like all wars, must end,” he said. “That’s what history advises. That’s what our democracy demands.”

Harold Koh, a Yale academic and former legal adviser to the State Department, welcomed the initiatives and praised the president for tackling the issues while so much else was happening.

“He could have avoided it. But what he did was, he not only owned it, but he framed it and explained the strategy he needs going forward,” Koh said on PBS.

Congressional Republicans were quick to condemn, accusing Obama of backing down on terrorism.

“The President’s speech today will be viewed by terrorists as a victory,” said Sen. Saxby Chambliss, (R-Ga.), vice chairman of the Senate Select Committee on Intelligence, in a statement.

On Fox News Sunday, Sen. Lindsey Graham (R-S.C.) accused Obama of being “tone deaf.” He said that our enemies try to attack us “literally every day,” and the President wants to change “the standards of when you can go after somebody with a drone.”

“The president sought to rebuke his own administration for taking the positions it has—but also to make sure that it could continue to do so,” wrote Benjamin Wittes, senior fellow at the think tank, Brookings Institution.

Drones
To be sure, Obama did not talk about retreating or downing weapons. He announced that he would like to end the existing Authorization to Use Military Force (AUMF), but cited the law to justify his administration’s controversial drone program.

“America’s actions are legal. We were attacked on 9/11. Within a week, Congress overwhelmingly authorized the use of force,” he said.

While his preference is “detention and prosecution of terrorists,” he said new forms of terrorism require “lethal targeted action” against “specific networks of violent extremists.”

Those actions are in “self-defense” and a “last resort” he said. He acknowledged for the first time that civilians have died as a result, and that it would be on his conscience for perpetuity. For Obama, the conclusion is inescapable that the new technology requires new safeguards.

“To say a military tactic is legal, or even effective, is not to say it is wise or moral in every instance,” he said.

He announced a new Presidential Policy Guidance that White House officials said he had been working on for months. Drone attacks would be restricted to suspects “who pose a continuing and imminent threat to the American people,” and who cannot be captured in other ways, he said. “Before any strike is taken there must be near certainty that no civilians will be killed or injured—the highest standard we can set.”

Obama also said he would lift a ban on the transfer of detainees from GTMO (Guantanamo Bay Naval Base) to other countries, and ultimately close the prison.

“The original premise for opening GTMO—that detainees would not be able to challenge their detention—was found unconstitutional five years ago,” he said.

GTMO has been costly, around a $150 million a year to keep open, and Obama is seeking to set up procedures “consistent with our commitment to the rule of law.”

“Imagine a future—10 years from now or 20 years from now—when the United States of America is still holding people who have been charged with no crime on a piece of land that is not part of our country,” he said.

He said he would look for ways to bring terrorists to justice in the United States, and announced that he has already asked the Department of Defense to locate a site for military commissions.

Of the original 800 detainees at GTMO, 166 are left. Among those, 56 are from Yemen and have been cleared to leave, but remain following a ban by Congress after a Nigerian trained in Yemen attempted to explode a bomb on a Detroit-bound jet in 2009.

Obama said he would appoint two officials, one at the State Department and another at the Departmen of Defense, to facilitate the transfer of detainees to other countries. He called on Congress to extinguish the ban.

An indication of how difficult that might be came in a statement from Michael McCaul (R-Texas), Chairman of the House Homeland Security Committee: “The President’s desire to close Guantanamo Bay leaves the homeland vulnerable to terrorists who will be transferred back to terror safe havens and that history has shown could return to the fight.”

Rights groups were cautious in their response.

“President Obama’s decision to lift his own ban on detainee transfers to Yemen suggests he may finally have the political will to follow through with his pledge to close Guantanamo,” said Kenneth Roth, executive director of Human Rights Watch. “But his reaffirmation that the U.S. is at war with unnamed and undefined ‘associated forces’ suggests little hope for real transparency.”

At a rally outside, members of ant-war group Code Pink group broke into cheers when they heard their co-founder, Medea Benjamin, interrupt the President, not once but three times.

Benjamin drew attention to the 102 prisoners on hunger strike in Guantanamo Bay, and asked the president to take drones out of the hands of the CIA and to stop signature drone strikes.

As Benjamin was escorted by security from the auditorium, Obama said he did not agree with everything she said, but added, “These are tough issues, and the suggestion that we can gloss over them is wrong.”

Speaking directly after her release from security, Benjamin said she had been surprised to gain access and to speak so long.

“Interrupting the President of the United States was not an easy thing to do, but I was disappointed,” she said. “I expected a lot more from him.”