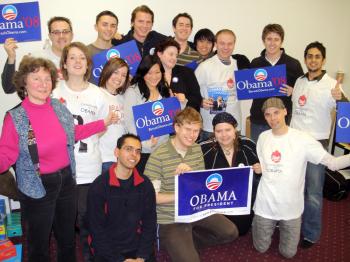 A group of Canadians who went to the United States to help get Barack Obama elected, at the Everett, Washington field office before the Washington caucus. (Andriy Mischenko)
US

Obama Inauguration Has Personal Meaning for Some Canadians

Joan Delaney
Senior Editor, Canadian Edition
Joan Delaney is Senior Editor of the Canadian edition of The Epoch Times based in Toronto. She has been with The Epoch Times in various roles since 2004.
View profile
Follow
biggersmaller
Print
The Obama-mania that gripped America during one of the most exciting elections in U.S. history is beginning to simmer again in the run-up to the president-elect’s inauguration on January 20.

One Canadian planning to attend the inauguration is Glyn Lewis, 25, a Simon Fraser University graduate who works for a non-profit organization in Vancouver.

You could say Lewis has a personal stake in seeing the new president get sworn in: he spent months on the ground in the U.S. during the campaign giving his all to help Obama get elected.

“I guess I was really tired of the way things are being done in Washington and disgusted by the impact the Bush decisions were having in the rest of the world…. I felt that I wanted to go down there, and I knew that I couldn't vote but that I could help and coach other people to do so,” he says.

After working on the campaign in the early days in Iowa in September 2007, Lewis returned to Canada and co-founded Canadians for Obama. This resulted in a group of 35 volunteers going to the U.S. and helping out in the states of Washington, Texas, Iowa, North Carolina, Kentucky and Virginia.

A pivotal moment for Lewis was when he walked into the campaign office in Des Moines, Iowa for the first time and saw a huge map on the wall showing the various points around the world from where young volunteers had come to help Obama get elected.

“I knew what this meant and I knew the powerful significance of what this map represented. Young people from around the world saw this campaign as a different kind of campaign and also a great means to make a significant difference,” he says.

Hundreds of Canadians who weren’t directly affiliated with Canadians for Obama went as well, says Lewis. “They called or they just walked into field offices or whatever and said ‘I'm here to help.’”

Why this groundswell of participation from non-U.S. citizens? Lewis’ theory is that people are universally fed-up of politics-as-usual, and could smell the whiff of change in Obama’s demeanour and the substance of his speeches.

“I think a lot of us are tired of conventional political gamesmanship, the tit for tats, the power struggles, the hyper partisanship, and I think it was about change in style of leadership and change in substance. I think that's why a lot of them came because they saw that this was going to have a huge impact all around the world.”

It was through Facebook that Katie Skinner, a law student at the University of British Columbia, heard about Canadians for Obama. Before long she was campaigning in Washington State, working out of a small crowded office in Everett. From there she and several other Canadians went to the Dallas-Fort Worth area for the primary and caucus known as the Texas Two-step.

It was during the primaries in Texas that the fierce battle between Obama and Democrat Hilary Clinton came to a head. The race there was tight, and Obama’s team worked virtually around the clock to get people out to the polls, says Skinner.

“We left Texas a little battered and bruised but I think it just further entrenched our commitment to the cause and to seeing it fulfilled.”

While working on the campaign in Virginia, whose capital, Richmond, was the seat of the Confederacy for much of the Civil War, Skinner met elderly African-Americans who remembered a time when they were denied the right to vote and who were now “eagerly anticipating the moment when they would mark the ballot for a candidate of their own.”

After Obama’s historic win on November 4, the highlight of Skinner’s journey occurred when she and several others who had worked on the campaign left the celebrations outside the White House and drove to the Lincoln Memorial. There, they stood on the steps where Martin Luther King gave his famous “I Have a Dream” speech 45 years ago.

“In my whole life I don’t think I’ve ever experienced the emotion that I felt standing there and just looking out. The sun was shining and it was a new day in more ways than one. I hope and pray that that moment won’t be lost on me and that everything I do for the rest of my life and what I dedicate myself towards will have that informing it.”

When Obama said in many of his speeches that “we are one people,” Skinner believes he was referring not just to Americans but to “everyone around the world who share the same hopes and dreams and who are tired of the petty partisanship and divisiveness.”

She sees Obama’s election as the dawning of a new era in politics that will foster “a spirit of working together” to bring about progressive social and environmental change.

“It really became clear to me early on that this just wasn’t simply a domestic, political campaign in the United States but was really a much larger and more powerful movement for progressive change that had the capacity to transcend borders, to make millions really work together to find solutions to the problems that we all face collectively.”

Lewis believes Obama’s message of a progressive politics “born of respect, empowerment and inclusion” and a campaign that focused on the issues while refraining from mud-slinging was what prompted millions of Americans to vote for him.

He believes the same sort of momentum that got Obama elected can happen in Canada, “where the fabric of our Canadian democratic processes are mired in all the same generational battles.”
“If in that historic year of 2008 the American people were able to work together at the grassroots to significantly change the way politics works right up to the very highest offices in one of the most powerful countries in the world, then why can’t we?”