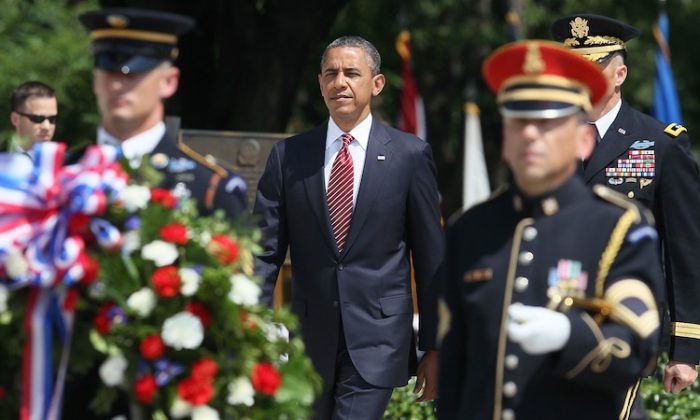 U.S. President Barack Obama (C) walks up to lay a commemorative wreath during a ceremony on Memorial Day at the Tomb of the Unknowns at Arlington National Cemetery on May 28, 2012 in Arlington, Virginia. For Memorial Day President Obama is paying tribute to military veterans past and present who have served and sacrificed their lives for their country. (Mark Wilson/Getty Images)
US

President Barack Obama on Monday paid tribute to war veterans at Arlington National Cemetery and reminded Americans that the nation is ending its decade-long war in Afghanistan.

After taking part in the traditional laying of a wreath at the Tomb of the Unknowns, the president gave a speech before a large audience, promising war veterans that “we will be there for you.”

“We have to serve them and their families as well as they have served us,” Obama said in his weekly radio and online address. “By making sure that they get the health care and benefits they need; by caring for our wounded warriors and supporting our military families; and by giving veterans the chance to go to college, find a good job and enjoy the freedom that they risked everything to protect.”

Obama is scheduled to visit the Vietnam War Memorial later in the day. The White House said the gathering at the memorial would mark the beginning of a 13-year program to honor those who served during the Vietnam War.