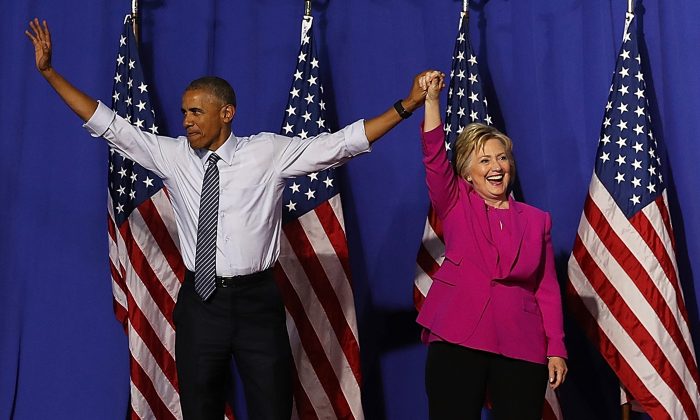 Obama Hits the Campaign Trail With Clinton: ‘I Want You to Elect Her’

President Obama said he is “ready to pass the baton” to Clinton, during his first appearance alongside Democratic presidential candidate Hillary Clinton in Charlotte, North Carolina, on July 5.

“I’m here because I believe in Hillary Clinton,” said Obama in his first outing on the campaign trail this year. “And I want you to elect her to be the next president of the United States.”

It has been years since Obama and Clinton went head-to-head for the 2008 Democratic presidential nomination, in a “hard fought primary” as Clinton described it. After losing to Obama, she stepped out of his way and endorsed and campaigned for him. Now the president is doing the same for his colleague.

“There has been no man or women more qualified to be president than Hillary,” said Obama.

The president reminisced on the time they were rivals, admitting he was losing in the first half of the primary to a smart and prepared Clinton.

Clinton admitted that she was surprised when Obama called on her to be secretary of state.

“We may have gone toe-to-toe, but we stood shoulder to shoulder,” Obama said, adding: “She was a great secretary of state.”

“It means so much to me personally to have the president’s support in this campaign,” she said, calling him a “friend” whom she was “honored to stand with in the good times and bad times.”

Clinton praised Obama’s eight years of presidency and said “We still have a lot of work to do,” adding that the job is now “building on the progress President Obama has made.”

He praised Clinton for her work as a senator and secretary of state, adding that she had participated in meetings where decisions had been made.

“I saw how she treated everybody with respect…that’s how you judge somebody. How they treat others when the cameras are off.” —@POTUS

The Democratic candidate took a shot at Trump saying he was unfit and too temperamental to be president.

Obama also attacked Trump saying, “Everybody can tweet, but nobody knows how to do the job until you sit behind the desk.”

“The other side’s got nothing to offer you,” said the president, adding that Clinton’s policies will help Americans.

“Even the Republicans on the other side don’t know what the guy is talking about.”

The crowd booed when Obama spoke about Trump.

The former secretary of state traveled to North Carolina with Obama aboard Air Force One, which immediately drew criticism from Trump, who was also campaigning in that state.

He went on Twitter saying, “Why is President Obama allowed to use Air Force One on the campaign trail with Crooked Hillary? She is flying with him tomorrow. Who pays?”

Taxpayers are paying a fortune for the use of Air Force One on the campaign trail by President Obama and Crooked Hillary. A total disgrace!

The joint appearance of Obama and Clinton comes just hours after FBI Director James Comey announced that the agency recommends no criminal charges in the presidential candidate’s private email investigation.

Comey said there is “no clear evidence” Clinton and her staff intended to violate laws, but said she was “extremely careless in handling classified information.”

“We cannot find a case that would support bringing criminal charges on these facts,” he said.

The FBI interviewed Clinton for three and a half hours on Saturday.