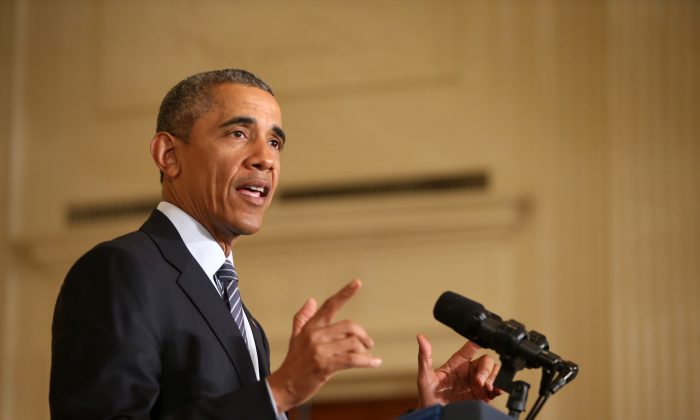 President Barack Obama speaks about his Clean Power Plan, Monday, Aug. 3, 2015, in the East Room at the White House in Washington. (AP Photo/Andrew Harnik)
US

WASHINGTON—Calling it a moral obligation, President Barack Obama unveiled the final version of his plan to dramatically cut emissions from U.S. power plants, as he warned anew that climate change will threaten future generations if left unchecked.

Touting the plan at a White House event on Monday, Obama said the unprecedented carbon dioxide limits are the “the single most important step” America has ever taken to fight climate change. He warned that because the problem is so large, if the world doesn’t get it right quickly, it may become impossible to reverse, leaving populations unable to adapt.

“There is such a thing as being too late when it comes to climate change,” Obama said.

Opponents immediately announced they would sue the government to stop the rules from taking effect. West Virginia Attorney General Patrick Morrisey, speaking at a summit of Republican state attorneys general, said West Virginia would be among a group of states “launching an aggressive legal campaign.”

“Their legal foundation is very, very shaky,” Morrisey said of the Obama administration. “We are confident that we will prevail.”

The final version of Obama’s plan imposes carbon dioxide limits stricter than what was previously expected on states: a 32 percent cut by 2030, compared with 2005 levels, the White House said. Obama’s proposed version last year called only for a 30 percent cut.

It also gives states an additional two years—until 2022—to comply, yielding to complaints that the original deadline was too soon. States will also have an additional year to submit their implementation plans to Washington.

Obama was joined in the East Room by Environmental Protection Agency Administrator (EPA) Gina McCarthy and by parents of asthma patients. The Obama administration has sought to draw a connection between climate change and increased respiratory illness in vulnerable populations.

“This is an especially wicked-cool moment,” said McCarthy, wielding a colloquialism from her hometown of Boston.

“There is such a thing as being too late when it comes to climate change.”
— President Barack Obama

As they prepared to sue the government, states and energy companies asked the EPA to put the rules on hold while legal challenges play out—a notion that White House press secretary Josh Earnest dismissed. In the absence of a voluntary delay, opponents planned to ask the courts to issue a stay.

Many Republican-led states have said they simply won’t comply. Senate Majority Leader Mitch McConnell, who has encouraged GOP governors to take that step, vowed to use legislation to thwart the president’s plan.

The pollution controls form the core of Obama’s ambitious and controversial plan to drastically reduce overall U.S. emissions, as he works to secure a legacy on fighting global warming. Yet it will be up to Obama’s successor to implement his plan, which has attracted strong opposition from the field of Republican presidential candidates.

Power plants account for roughly one-third of all U.S. emissions of the heat-trapping gases blamed for global warming, making them the largest single source.

The Obama administration estimated the emissions limits will cost $8.4 billion annually by 2030. The actual price won’t be clear until states decide how they’ll reach their targets. But energy industry advocates said the revision makes Obama’s mandate even more burdensome, costly, and difficult to achieve.

Another key change to the initial proposal marks a major shift for Obama on natural gas, which the president has championed as a “bridge fuel” whose growing use can help the U.S. wean itself off dirtier coal power while ramping up renewable energy capacity. The final version aims to keep the share of natural gas in the nation’s power mix at current levels.