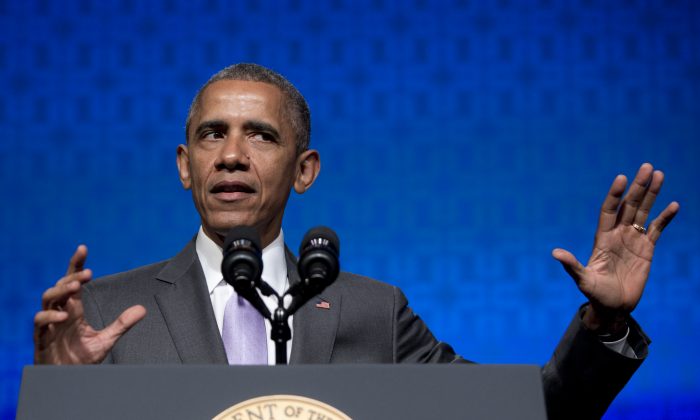 Obama: Health Law Is Now ‘Reality,’ Despite What Critics Say

WASHINGTON—President Barack Obama on Tuesday declared his health care law a firmly established “reality” of American life even as the legality of one of its key elements awaits a decision by the Supreme Court.

“This is now part of the fabric of how we care for one another,” Obama said of the law, one of his most prized domestic policy accomplishments.

For the second day in a row, Obama mounted a stout defense of a law that remains unpopular with the public.

It has been under legal challenge but that has contributed to 14.75 million adults gaining coverage since its health care exchanges began signing up people in 2013.

Obama’s remarks, made at the annual Catholic Health Association Conference in Washington, amounted to a political argument for the law just weeks before the high court is expected to render its decision in a case that could wipe out insurance for millions of Americans.

Obama poked fun at opponents for issuing “unending Chicken Little warnings” about what would go wrong under his health care program.

Anticipating the president’s speech, Senate Majority Leader Mitch McConnell, R-Ky., said it was Obama who was “jousting with reality again.”

“I imagine the families threatened with double-digit premium increases would beg to differ, as would the millions of families who received cancellation notices for the plans they had and wanted to keep,” McConnell said. His office issued an email citing news accounts about surging health care costs, potential rate hikes and cancelled health plans.

At issue in the Supreme Court case is whether Congress authorized federal subsidy payments for health care coverage regardless of where people live, or only for residents of states that created their own insurance marketplaces. In the other states, residents can buy insurance through a federally run marketplace.

Nearly 6.4 million low- and moderate-income Americans could lose coverage if the court rules people who enrolled through the federal site weren’t eligible for the subsidies.

The decision rests on the court’s interpretation of a short phrase in the voluminous law. But Obama, wielding statistics and personal anecdotes, made a case that the law is so established that it has woven itself into the health care system.

“Five years in, what we are talking about is no longer just a law, it’s no longer just a theory. It isn’t even about the Affordable Care Act or Obamacare. This isn’t about myths or rumors that folks try to sustain,” he said.

“There is a reality that people on the ground day to day are experiencing.”

Obama was speaking to a friendly audience. The Catholic Health Association split with the U.S. Roman Catholic bishops to support the Obama administration in 2013 in shaping a compromise over the law’s birth control coverage. Sister Carol Keehan, the association’s president and CEO, introduced Obama, saying the Affordable Care Act “took the first step toward guaranteeing health care for everyone in our great nation.”

Public opinion remains mixed, however. A recent Washington Post-ABC poll found that a majority of Americans continue to oppose the law. But the poll, conducted at the end of May, also found that 55 percent of those surveyed don’t want the Supreme Court to block any subsidies.

On Monday, Obama jabbed the Supreme Court for even considering the latest challenge to the law, arguing that the intent of Congress was to provide subsidies under state or federal exchanges.

“Frankly, it probably shouldn’t even have been taken up,” he said.

And while voicing confidence that the court would rule in the administration’s favor, Obama said that it would be up to the Republican-controlled Congress to fix the law if the high court’s decision eliminates some of the federal subsidies.

Twenty-six of the 34 states that would be most affected by the ruling have Republican governors. Twenty-two of the 24 GOP Senate seats up for election in 2016 are in those states. The White House is betting that while Republicans have been eager to erode or eliminate the health care law, public anger over the loss of health insurance would force lawmakers to come up with a remedy.

Should the court rule against Obama, said Rep. Steny Hoyer, the second-ranking Democrat in the House, Republicans will find themselves in a situation akin to a dog chasing down a car.

“They keep barking at the car and if they catch the car they’re not going to know what to do with it,” he said.