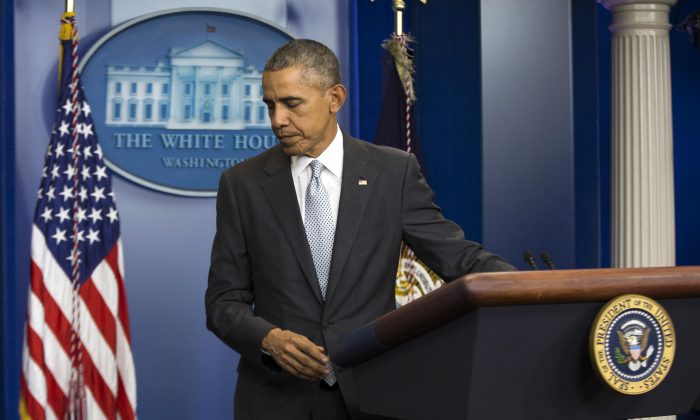 President Barack Obama walks from the podium after speaking about attacks in Paris from the briefing room of the White House, on Nov. 13, 2015, in Washington, D.C. Obama is calling the attacks on Paris an "outrageous attempt to terrorize innocent civilians" and vows to do whatever it takes to help bring the perpetrators to justice. (AP Photo/Evan Vucci)
US

WASHINGTON—The global anxiety sparked by a series of deadly attacks in Paris by the Islamic State (ISIS) has given new urgency to President Barack Obama’s upcoming talks with world leaders.

The crisis in Syria, where ISIS has taken root, was already high on the agenda at the meeting of 20 leading industrialized and emerging-market nations. But the violence in Paris that killed at least 127 people will dramatically change the dynamic of the talks in Antalya, Turkey, a seaside resort city just a few hundred miles from the Syrian border.

In remarks from the White House shortly after the attacks Obama said, “We’re going to do whatever it takes to work with the French people and with nations around the world to bring these terrorists to justice, and to go after any terrorist networks that go after our people.”

French President Francois Hollande said ISIS militants were behind the attacks and the extremist group claimed responsibility Saturday. The U.S. has not yet said whether it believes the group is responsible for the carnage.

Obama was due to depart Washington Saturday afternoon for a trip that also includes stops in the Philippines and Malaysia. He’s also supposed to travel to Paris in two weeks for a high-stakes climate conference, though there’s now some doubt whether that meeting can take place in the French capital, given that securing the leaders could come at the expense of other pressing security matters.

Security is expected be extremely tight in Turkey as leaders gather for two days of talks in Antalya, where several suspected ISIS militants were recently detained.

Ahead of Obama’s talks in Turkey, Secretary of State John Kerry was meeting in Vienna with his counterparts from Russia, Turkey and other nations with a stake in Syria. The discussions suggest a new seriousness in efforts to end the 4 ½-year civil war, though how or when that might happen still remains deeply uncertain.

U.S. officials have played down prospects for an imminent breakthrough to quell Syria’s civil war and defeat the militants that have taken advantage of the chaos. Obama’s National Security Adviser Susan Rice said the goal was simply to make “incremental progress.”

More 250,000 people have been killed in the clashes between rebels and forces loyal to Syrian President Bashar Assad. Eleven million people have been uprooted from their homes, sparking a massive migration crisis in Europe that is also expected to be on the agenda at the G20 meeting.

The president’s first meeting in Turkey is with Turkish President Recep Tayyip Erdogan, the Turkish leader whose ties with the White House have become increasingly strained. Their meeting wasn’t announced until shortly before Obama’s departure, a underscoring the “very tense nature” of the U.S.-Turkey relationship, according to Heather Conley, a Europe expert at the Center for Strategic and International Studies, a Washington think tank.

While Erdogan shares Obama’s desire to get Assad out of power in Syria, the two leaders have disagreed over tactics.

“The U.S. and Turkey do not align on the dimension of the Syrian campaign,” Conley said.

France Vows to Punish ISIS for Paris Attacks That Killed 127

Erdogan has been frustrated by Obama’s willingness to use military force against ISIS, but not against Assad. The U.S., meanwhile, was irked by Erdogan’s reluctance to join the campaign against ISIS, though Turkey eventually decided to start bombing the militants this summer and also allowed the U.S. to launch its own airstrikes from key bases in the county.

Obama’s dealings with Russian President Vladimir Putin over Syria have been even more complicated. As Assad’s biggest benefactor, Russia has essentially propped up the Syrian leader throughout the crisis. Until Putin is willing to abandon Assad and accept new leadership in Syria, it’s unlikely a political solution can be reached.

Despite Obama’s vow to isolate Putin in retaliation for Russian aggression in Ukraine, the president agreed to meet with his longtime foe in New York earlier this year to discuss Syria. The slight optimism U. S. officials expressed after the meeting was quickly dashed when Russia began launching its own airstrikes in Syria, raising the prospect of a proxy war with the U.S.

While Putin says his country’s forces are targeting ISIS, U.S. officials have accused Russia of instead going after forces fighting Assad in a bid to protect the Syrian leader.

Obama and Putin won’t hold another formal meeting in Turkey, but White House officials said the leaders would have plenty of time to talk on the sidelines of the G20.