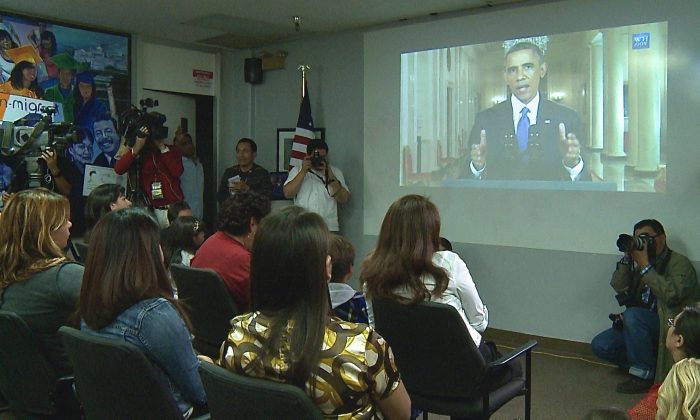 LOS ANGELES—Immigrant groups around the country watched President Obama’s speech on Thursday as he announced his plan for unilateral executive action on immigration.

“Myself and both of my parents are undocumented, and then my two siblings are U.S. citizens,” said student Tiana Ramos, who watched the speech at a viewing party hosted by the Coalition for Humane Immigrant Rights of Los Angeles (CHIRLA). “So, today’s announcement definitely resonates and brings a lot of hope to my family.”

“Millions of immigrants in every state, of every race and nationality still live here illegally,” said Obama in a televised statement from the White House. “And let’s be honest—tracking down, rounding up, and deporting millions of people isn’t realistic. Anyone who suggests otherwise isn’t being straight with you. It’s also not who we are as Americans.”

Starting in six months, undocumented immigrants who have lived in the U.S. for five years and are parents of either U.S. citizens or permanent residents or more will be able to apply for a work permit. They will also have protection from deportation for three years.

The plan will expand Deferred Action for Childhood Arrivals, or DACA, which allows illegal immigrants who meet certain criteria to stay in the U.S. legally for a period of time. Previously it applied to children born after 1981 and came to the U.S. before 2007. Now there is no age limit, and the year was extended to Jan 1, 2010.

Also under Obama’s plan, more visas will be available for high-skilled jobs, and security will be beefed up at the border, with an emphasis on quickly deporting criminals.

“If you’re a criminal, you’ll be deported. If you plan to enter the U.S. illegally, your chances of getting caught and sent back just went up,” Obama said.

The announcement came just after election results showed the Senate will be controlled by republicans starting next year.

An immigration reform bill that passed in the democrat-controlled Senate last year was not even brought to a vote in the republican-controlled House of Representatives.

Analysts say that, after the election, Obama gave up on working with Congress and decided to make good on a campaign promise with the options he had.

“I continue to believe that the best way to solve this problem is by working together to pass that kind of common sense law. But until that happens, there are actions I have the legal authority to take as President,” he said. “The same kinds of actions taken by Democratic and Republican presidents before me—that will help make our immigration system more fair and more just.”

Immigrant rights groups such as CHIRLA said it was a Band-Aid solution as the order could be reversed at any moment if found unconstitutional, and does not deal with the millions more immigrants who are in the United States illegally.

“It is the best of times for millions of our loved ones while it remains the darkest of times for many more who continue to fight for the opportunity to realize their American Dream,” said Angelica Salas, CHIRLA executive director.

“We have often stated a deferred action program, while important to relieve the suffering of millions, is a temporary solution. Legislation with a path to citizenship is the permanent solution and we will continue to hold Congress accountable for failing to pass sensible and humane immigration reform,” she said.

Meanwhile, opponents of the plan called it “amnesty” and “lawless.”

“The President’s decision to nullify the immigration laws of this country through executive action will hurt our economy, lead to more unemployed American citizens, and make us less secure,” said republican Congresswoman Marsha Blackburn of Tennessee in a press release.

Blackburn authored legislation to freeze funds for DACA and prohibit the President from taking executive action to expand amnesty for illegal immigrants, which passed the House of Representatives in August.

Kentucky Senator Mitch McConnell, who will become the majority leader of the Senate in 2015, promised retaliation during remarks on the Senate floor on Thursday.

“If President Obama acts in defiance of the people and imposes his will on the country, Congress will act,” McConnell said.

Obama signed the plan for his executive action at the Del Sol High School in Las Vegas on Friday where he visited in 2013 to discuss his plan for immigration reform.