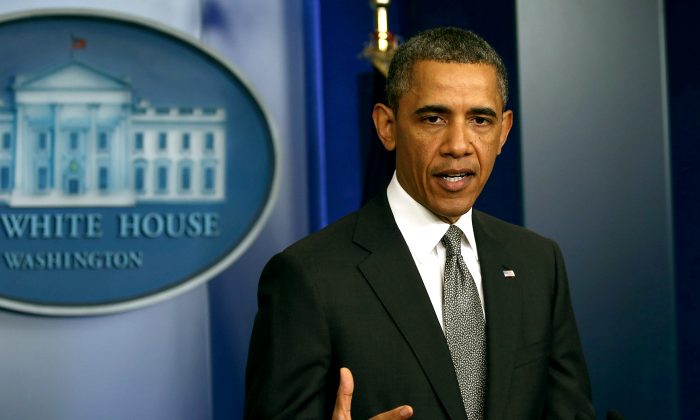 U.S. President Barack Obama speaking at the White House April 16, praised first responders and the public for their courage in the face of the horrific attacks. (Mark Wilson/Getty Images)
US

Obama Focuses on Resilience in The Face of Terror

WASHINGTON – President Barack Obama described the bombings at the Boston Marathon as an act of terror Tuesday, focusing on the resilience of those affected rather than the horror of the brutal attack.

“Any time bombs are used to target innocent civilians it is an act of terror,”  he said in a  press briefing at the White House.

The President had just come from a briefing with his national security team which included FBI Director Robert Mueller and Counterterrorism and Homeland Security Adviser Lisa Monaco.

Investigators do not yet know who was responsible for bomb attacks.

What we do know, Obama said is that, “whether it was planned and executed by a terrorist organization, foreign or domestic, or was the act of a malevolent individual…the American people refuse to be terrorized.”

Three people were killed by two bombs that exploded just before 3 pm near the finish line of the Boston Marathon April 15. One of those killed was an 8 year old boy.

More than 170 people are reported to be injured, 17 critically.  Health officials say many injuries are sever, made worse by ball bearings, nails and metal fragments that were thought to have been included in the bombs.

“My opinion is that most of them were in the bomb,” said Dr. George Velmahos, trauma chief at Massachusetts General Hospital, according to the Boston Globe. “I think it’s unlikely they would be so consistent if they were pulled out from the environment.”

In his address Obama sought to console a nation in shock by the horrific nature of the attack, praising emergency response teams, medical workers, the police and the public for their “heroism” and “kindness.”

“Exhausted runners who kept running to the nearest hospital to give blood, and those who stayed to tend to the wounded, some tearing off their own clothes to make tourniquets….medical students who hurried to help …and the good people of Boston who opened their homes to the victims of this attack and those shaken by it.”

“So if you want to know who we are, what America is, how we respond to evil — that’s it.  Selflessly.  Compassionately.  Unafraid,” he said.

In a press briefing in Boston Tuesday morning FBI investigators and Boston law enforcement officials called for witnesses to bring in photos or videos that might offer clues to those responsible for the bombs.

“This is the most complex crime scene in the history of the department,” said Boston Police Commissioner Ed Davis.

Officials confirmed that there were only two bombs, set apart and timed to explode within seconds of each other. Previously there had been false reports of several unexploded devices.

“There were only two devices, and they were the ones that went off,” said Richard DesLauriers, from the FBI’s Boston Division. “There are no known additional threats.”

DesLauriers said the FBI was using its “full capacity” to track down the perpetrators, including national and international offices.

“We will go to the ends of the Earth to identify the subject or subjects who are responsible for this despicable crime — and we will do everything we can to bring them to justice,” he said.

A record 23,000 runners participated in this year’s Boston Marathon, an iconic event for the city as the oldest and one of the most prestigious marathons in the world.

The marathon is held every year on Patriots Day which commemorates the first battles in 1775 of the American Revolution.

April 15 is also Tax Day in the United States, the last day that taxes are due.  The significance of the date is leading authorities to consider whether the attack may be an anti-government attack from within America.

The brutal bombing  of a Federal building in Oklahoma city by Timothy McVeigh in 1995 and the violent end of a siege at Waco Texas in 1993, were both influenced by anti-government sentiments. They too occurred in the third week of April, both on April 19.