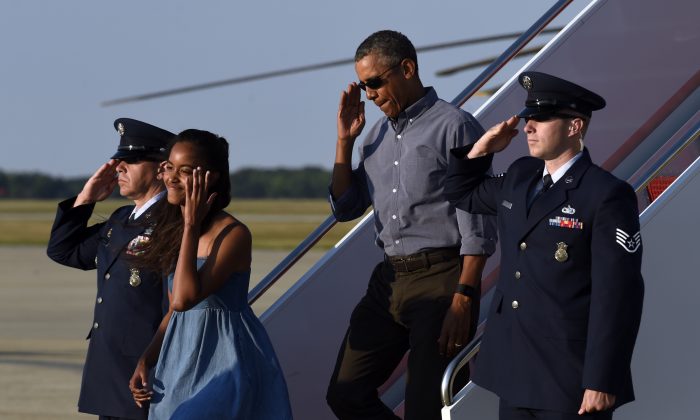 President Barack Obama salutes as he walks off of Air Force One with his daughter Malia at Andrews Air Force Base in Md., Sunday, Aug. 23, 2015. The president is returning to Washington after he and his family spent more than two weeks vacationing on the Massachusetts island of Martha's Vineyard. (AP Photo/Susan Walsh)
US

President Barack Obama has purchased another home—for when he leaves office in January, according to a new report.

The New York Post’s Page Six reported the Obamas bought a home in Rancho Mirage, California. The town is located near Palm Springs and it’s known for a number of golf courses and resorts. Obama frequented the place during vacations.

Michael S. Smith, the interior designer, is in charge of designing the inside of Obama’s new California home.

Obama is also leasing a $4.3 million, nine-bedroom home in Washington, D.C. That home will be the family’s main home for the next two years as their youngest daughter, 15-year-old Sasha Obama, can finish high school at Sidwell Friends School. The mansion in the DC neighborhood of Kalorama was last sold in May 2014 for $5,295,000, Politico reported earlier this year. It also has a two-car garage and a parking lot for as many as 10 vehicles. Sasha’s sister, Malia, will graduate from the school and take a year off before going to Harvard.

The Obamas are also reported to have bought a home in Hawaii, the home state of the president.

The Desert Sun newspaper has been reporting on rumors of the Obamas moving to Rancho Mirage for several years.

Obama: I’ll Push Back on Trump If Needed to Defend US Ideals