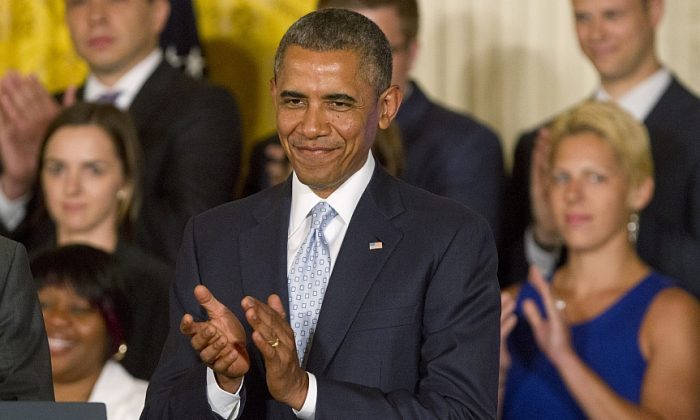 President Barack Obama in the East Room of the White House in Washington, Monday. (AP Photo/Jacquelyn Martin)
US

Following up on a promise made Saturday in his weekly address, President Barack Obama issued a presidential memorandum Monday to grant relief for student loan borrowers.

More people will be covered by a provision that limits loan payments to 10 percent of monthly income. He also asked the Senate to develop and pass more sweeping legislation on the issue.

“I’m only here because this country gave me a chance through education,” Obama said. “We are here today because we believe that in America, no hardworking young person should be priced out of a higher education.”

Obama wrote in his autobiography that he and first lady Michelle Obama found their student loans onerous in the early years of their married life. Both came from families of modest means and both went to expensive Ivy League colleges.

An existing repayment plan Obama announced in 2010 lets borrowers pay no more than 10 percent of their monthly income in payments, but is only available for those who started borrowing after October 2007. Obama’s memo expands that program by opening it to those who borrowed anytime in the past.

“It’s going to make progress, but not enough,” Obama said. “We need more.”

One of the administration’s goals to prevent those who borrowed for college from making late payments or defaulting on loans.

“The challenges of managing student loan debt can lead some borrowers to fall behind on their loan payments and in some cases even default on their debt obligation, with such consequences as a damaged credit rating, losing their tax refund, or garnished wages. Because credit ratings are increasingly scrutinized in making employment offers, financing a home, or even opening a bank account, a damaged credit rating can further reduce borrowers’ ability to repay their loans,” it said in a White House statement.

To that end, Obama used the East Room appearance to endorse legislation that would let college graduates with heavy debts refinance their loans.

“This should be a no-brainer,” Obama said.

The Senate is expected to debate the legislation next week, but it faces significant opposition from Republicans, who disagree with the Democrats’ plan for how to pay for it.

No Republicans voted for the original 2010 legislation that altered the way student loans are structured. At the time, Senate Minority Leader Mitch McConnell said in a statement, “There’s no reason the president should be holding campaign-style events to bash Republicans for supposedly opposing him on student loan reform, when we are in agreement on the need for a permanent reform, when the plan we have put forward is pretty similar to his own.”