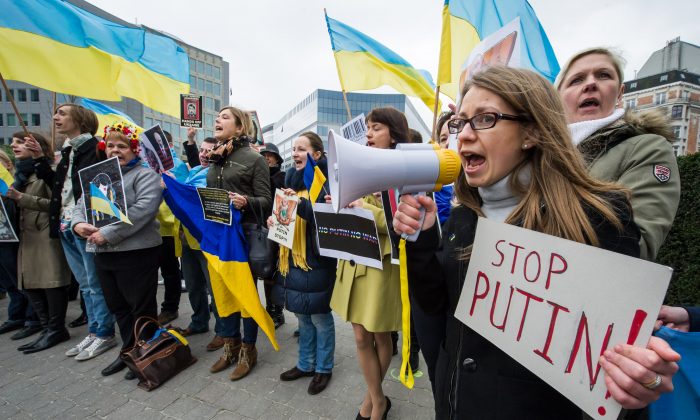 Pro-Ukrainian activists shout slogans as they demonstrate during an EU foreign ministers meeting outside the EU Council in Brussels, Monday. (AP Photo/Geert Vanden Wijngaert)
US

President Obama expanded sanctions against Russia Monday, saying, “We have been guided by a fundamental principle. The future of Ukraine must be decided by the people of Ukraine.”

Although the sanctions are described as the toughest ones since the Cold War, they are very limited.

According to Barry Strauss, an expert on international relations and professor of history at Cornell University, they are limited for a reason. “I think they are symbolic. I don’t think they are going to make a big difference. The administration may be testing public opinion,” he said. However, the sanctions may be just a start.

The European and American sanctions came in response to a referendum Sunday in Crimea in which a landslide majority voted to secede from Ukraine. Western leaders consider the vote illegal because it did not include the whole population of Ukraine.

Strauss said it’s in American interests to deter Russian expansion. Yet the Obama administration’s peace policy has been broadly popular, in his opinion, and it is unlikely that the American people would want military action over Crimea. So the situation needs an open discussion.

Putin has been working for a long time to build up Russia’s influence, through oil exports and through alliances, and now feels empowered, according to Strauss. “Traditionally, Russian politics has been to control a vast area, both as a gate to the West and as a security zone to the West.”

Strauss was careful not to say that Putin’s confidence had to do with any perceived American weakness. “It’s not just America pulls back, it’s not so simple.”

This has been an accusation from some critics of the administration: Russia is expanding because it thinks America will be passive.

But there are more issues.

That aspect of the Ukraine crisis is one reason Sen. John McCain (R-Ariz.) lambasted both the president and fellow Republicans in the Senate over what he considers a weak response.

“I think Vladimir Putin must be encouraged by the absolute timidity,” said Sen. John McCain, who had just returned from a weekend trip to Ukraine.

“I don’t know how it could have been weaker, besides doing nothing—seven people being sanctioned after naked aggression has taken place,” he told MSNBC. The seven sanctioned people are close to Putin. They include the deputy prime minister of the Russian Federation, a Putin aide, and deposed Ukraine President Viktor Yanukovych.

McCain scorned the Senate for not supporting Ukraine enough or immediately voting for a substantial aid package. He wants a far more aggressive response from the United States.

However, jumping directly into a military response would not be democratic. “American people could not [want] going to war over Ukraine,” said Strauss.

Yet this crisis could make the American people rethink the planned reduction in the military. “This is a dangerous world,” said Strauss.

He wants the country to learn more and reflect on the global situation. People do not understand international affairs as much as they should. “The world is a cruel, tough, hard place, and it’s not like life inside the United States. We really have to have an open, clear discussion about what people want,” said Strauss.