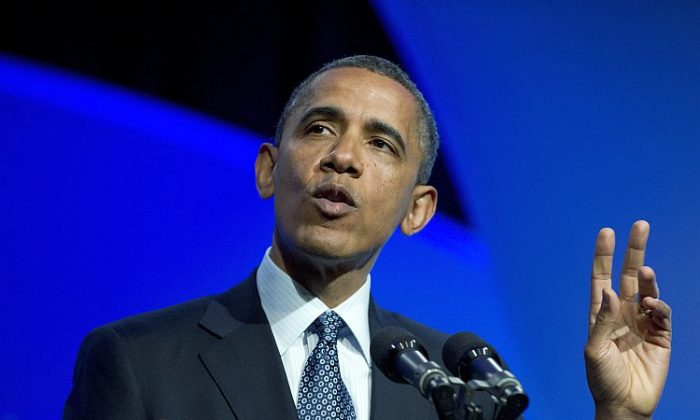 President Barack Obama waves at supporters during a campaign event at the University of Vermont in Burlington, Vt, on March 30. On Tuesday, Obama raked the Republican budget over the coals in a speech that brought election issues to the forefront. (Jewel Samad/AFP/Getty Images)
US

In what appears to be the drawing of election battle lines, President Barack Obama dismissed the House-passed Republican budget as an attack on the middle class, describing it as a “Trojan horse” and a “radical vision.”

In a marked step-up in campaign language, Obama said the spending plan proposed by House Budget Committee Chairman Paul Ryan was “thinly veiled social Darwinism” and “a prescription for decline.”

“It is antithetical to our entire history as a land of opportunity and upward mobility for everyone who’s willing to work for it—a place where prosperity doesn’t trickle down from the top, but grows outward from the heart of the middle class,” he told reporters at an Associated Press luncheon on April 4.

Ryan’s $3.5 trillion plan calls for tax reform, proposing to cut both the top individual and the corporate tax rate from 35 percent to 25 percent, while making the Bush tax cuts permanent.

Defense spending would largely remain the same, while the Affordable Care Act and the Dodd-Frank financial regulations would be repealed.

In launching the budget, Ryan said major reforms were needed to rein in federal spending and reduce the deficit. He argued that social programs like Medicaid, the food stamp program, and Pell Grants for education, are the main contributors to the budget imbalance and must therefore take cuts. He also advocated more autonomy for the states.

Obama said the Ryan budget would cut education, research and development, and infrastructure, “the very things we need to grow an economy that’s built to last.”

He described the Republican budget plan as so far to the right that it “makes the Contract With America look like the New Deal.”

In a delineation of battle lines for the upcoming elections, Obama pointed to GOP presidential front-runner Mitt Romney’s endorsement of the Ryan budget.

“One of my potential opponents, Gov. Romney, has said that he hopes a similar version of this plan from last year, will be introduced as a bill on day one of his presidency,” Obama said. “He even called it ‘marvelous,’ which is a word you don’t often hear when it comes to describing a budget.”

“This is the party’s platform,” Obama said.

Campaigning for the primaries in Wisconsin in support of Romney, Ryan issued a statement responding to the attack.

“History will not be kind to a president who, when it came time to confront our generation’s defining challenge, chose to duck and run,” Ryan said. “The president refuses to take responsibility for the economy and refuses to offer a credible plan to address the most predictable economic crisis in our history.”

“If the president were serious, he would put forward a plan to deal with our debt crisis and save Social Security, Medicare, and Medicaid for future generations of seniors without raising taxes on small businesses that are struggling in this economy,” Boehner said in a statement. “Instead, he has chosen to campaign rather than govern, and the debt crisis he is presiding over is only getting worse.”

Isabel Sawhill, a budget expert and senior fellow in economic studies at the Brookings Institution, says the Ryan budget proposal was largely a platform for Republican Party views during an election year.

“It’s certainly not a realistic set of proposals and has zero chance of being enacted in anything like its current form,” she said in a Web chat, adding, “But there are some serious proposals contained in Ryan’s budget that could continue to get attention, such as premium support in health care, tax reform, and devolution of responsibility to states.”