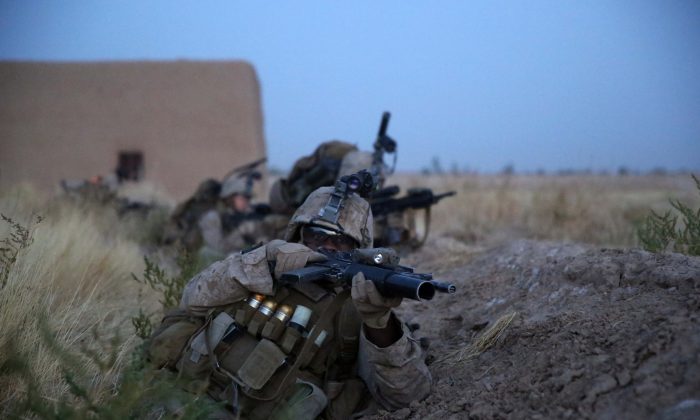 Even though he doesn’t support the concept of “endless war,” President Barack Obama announced that he won’t withdraw U.S. troops from Afghanistan as previously planned, and about 5,500 soldiers will be left there until he leaves office in 2017.

The move could very well damage Obama’s legacy, as it essentially contradicts his announcement in May 2014 that the United States will “turn the page” on 14 years of war in Afghanistan. “This year we will bring America’s longest war to a responsible end,” he said at the time.

But now, “Afghan forces are still not as strong as they need to be,” Obama said at the White House on Oct. 15. Recently, Taliban forces captured the city of Kunduz, suggesting that a complete American troop withdrawal could lead to a huge security gap in the restive country.

In this latest Taliban victory, the terrorist organization was able to take over an entire province and hold it for several days. Reports have indicated the Taliban announced its withdrawal from Kunduz City, the capital of Kunduz Province, after 15 days of holding it.

His decision to keep the U.S. military in Afghanistan will invariably foist the conflict onto the 2016 presidential race. The next president will become the third commander in chief to preside over the war and will have the option to maintain the current troop presence, end it, or get more involved in the war.

“I do not support the idea of endless war,” Obama said, adding that keeping thousands of American soldiers in Afghanistan was critical for the long-term security interests of the United States. “I’m absolutely confident this is the right thing to do.”

The debate over U.S. troop presence in Afghanistan was a central part of the 2012 presidential race. Obama said he had a clear plan to draw down American involvement in the country, running an ad at the time that attacked Republican presidential candidate Mitt Romney for advocating prolonged U.S. involvement there.

Originally, it was planned that a small amount of troops guarding embassies would stay while all other troops would leave by the end of 2016. There are currently 9,800 troops stationed in Afghanistan, and the new plan will draw down to 5,500 troops in 2017 at a pace determined by commanders, Obama said. U.S. forces will be stationed in Kabul, Bagram, Jalalabad, and Kandahar.

“Pressure from Pakistan has resulted in more al Qaeda coming into Afghanistan, and we’ve seen the emergence of an [ISIS] presence. The bottom line is in key areas of the country, the security situation is still fragile, and there’s risk of deterioration,” the president stressed.

Obama stressed the ending of NATO combat operations in December of last year emboldened the Taliban, which stepped up its insurgency in 2015.

“It’s the right thing to do,” the president said. “As commander in chief I will not allow Afghanistan to be used as safe haven for terrorists to attack our nation again.”

In elaborating on Afghanistan’s precarious security situation and why U.S. troops need to stick around, Brookings Institute senior fellow Vanda Felbab-Brown said that American air support was crucial in pushing the Taliban out of Kunduz. In that operation, the U.S. bombed a Médecins Sans Frontières hospital, killing 22 people, including civilians and medical staff.

“Despite the terrible and tragic mistake of the U.S. bombing of the Médecins Sans Frontières hospital, maintaining and expanding U.S. air support for the Afghan forces, and allowing for U.S. support beyond in extremis, such as in preventing a similar Taliban offensive, is vital,” Felbab-Brown wrote.

A significant reduction in U.S. assistance “will greatly increase the chances that another major Taliban success—like that of Kunduz, and perhaps possibly again in Kunduz—will happen again,” she argued. A successful Taliban offensive would also bring about dangerous political instability.

There have also been reports of militants loyal to the Islamic State in Iraq and Syria, or ISIS, operating in Afghanistan. U.S. commanders have expressed concern about ISIS fighters moving into the country and getting recruits from within the Taliban and local militant groups.

U.S. officials have stressed that conditions on the ground in Afghanistan have changed since Obama made his first decision on a more precise troop withdrawal timeline more than two years ago. On Wednesday, White House press secretary Josh Earnest said, “Over the last seven years we’ve made a lot of important progress.”