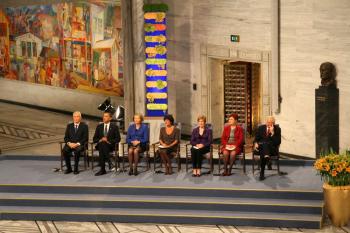 At the beginning of his 35-minute-long acceptance speech, Obama acknowledged the controversy his award has sparked after the Norwegian Nobel Committee surprised the world on Oct. 9 with its decision. He expressed humility by receiving the honor, calling his accomplishments “slight” in comparison with previous laureates like Martin Luther King Jr., or Nelson Mandela.

As he continued, President Obama confronted another criticism of his award, related to the issue that he is “the commander-in-chief of a nation in the midst of two wars.” Obama devoted a large part of his speech to the defense of the concept of a “just war,” suggesting the U.S. war in Afghanistan belongs to this category.

“For make no mistake: evil does exist in the world. A nonviolent movement could not have halted Hitler’s armies. Negotiations cannot convince al-Qaeda’s leaders to lay down their arms. To say that force is sometimes necessary is not a call to cynicism—it is a recognition of history,” said President Obama in an attempt to address the paradox that a peace prize winner can also be engaged in a war.

“Peace requires responsibility. Peace entails sacrifice,” said Obama in relation to the existence of NATO, which he considers to be “indispensable,” but also advocated a strengthening of U.N. and regional peacekeeping.

President Obama followed with advocating U.S. foreign policy, dismissing the notion that his country wants to impose their own values on others, calling human rights universal values, not just Western ones.

Yet another criticism of the decision to award Obama with the prize is the perception that he has not yet done enough worthy of earning it.

However, Mr. Thorbjorn Jagland, chairman of the Norwegian Nobel Committee for Nobel Peace Prize, in an interview with NTDTV, defended the decision: “We must see strictly the testament of Alfred Nobel, which is to prize the one who contributes most to the development of world peace.

“We can see during the last period, what President Barack Obama has done is to have created a climate for cooperation among big countries. That created a condition for world peace and also the condition to solve the big conflicts.”

Jagland also noted that “most of the important prizes have been controversial.”

Mikhail Gorbachev, awarded the prize in 1990, was a good example, he says.

“He was secretary general of the communist party in Soviet Union. It was a big debate worldwide, much more than what we have it now. Today everyone realizes it was a very important prize, because he paved the way for changes that took place in Europe,” said Jagland.