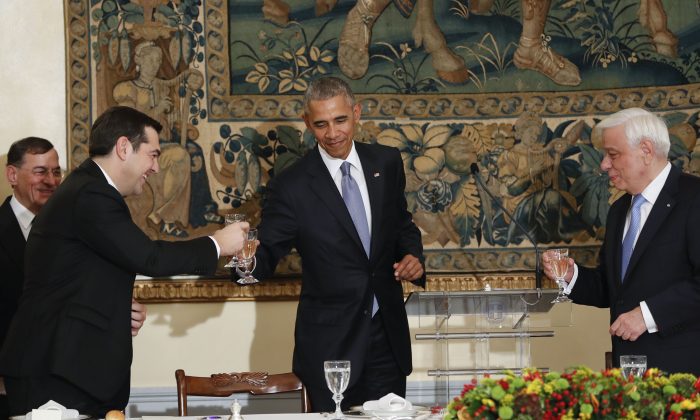 ATHENS, Greece—President Barack Obama pointed Tuesday to fears of globalization, economic uncertainty, suspicion of elites—anything but his own performance—as he grasped for ways to explain the unexpected rise of Donald Trump.

Opening his final overseas trip as president, Obama acknowledged he was surprised by Trump’s victory—and said it stemmed from deep-seated anxieties among working-class Americans that government must do better to address. But, he added paradoxically: “That’s been my agenda for the last eight years.”

“People seem to think I did a pretty good job,” Obama told reporters, citing his strong approval numbers. “So there is this mismatch, I think, between frustration and anger.”

In a joint news conference with Greek Prime Minister Alexis Tsipras, Obama said his proposals on jobs, education and infrastructure would have helped the same voters whose frustration drove Trump’s success at the polls—if only they’d been implemented.

“The problem was I couldn’t convince the Republican Congress to pass a lot of them,” Obama said.

It was also the clearest sign yet that the president did not accept Trump’s election as a repudiation of his policies, despite Trump’s ardent rejection of nearly every piece of Obama’s legacy.

Obama’s words are being watched closely by world leaders who see parallels between Trump’s election and the rise of far-right movements in their own countries amid continued economic anxiety. After Athens, Obama planned visits to Germany and Peru.

Obama’s visit sparked large protests in central Athens, prompting riot police to use tear gas and stun grenades to disperse about 3,000 left-wing marchers after they tried to enter an area declared off-limits to demonstrators. No injuries or arrests were reported.

Obama seemed skeptical that “the new prescriptions being offered” would satisfy voters’ restlessness.

At home, Obama’s party is split as it tries to come to terms with Trump’s win. Some Democrats are pushing for an immediate and concerted effort to block Trump at all costs, while others want an internal shake-up and new direction aimed at winning back support among working-class voters.

Obama has not weighed in directly on the leadership fight. But on Tuesday, he suggested the problem wasn’t the course he set for the party, but some of the shortcomings of Hillary Clinton and her campaign.

“Presidential elections always turn on personalities, they turn on how campaigns are run, they turn on natural desires for change,” he said, not mentioning Clinton by name.

Clinton’s supporters say she faced a difficult balancing act: She embraced Obama, hoping to avoid alienating his supporters, while simultaneously trying to acknowledge the persistent economic challenges and the uneven economic recovery.

“There is a tension between the real life, which is very tough for working-class voters, and the president’s overall narrative,” Democratic pollster Stan Greenberg said.

At each stop on his trip, Obama expects to confront apprehension from world leaders who fear Trump could bring about seismic changes in U.S. foreign policy and withdraw the U.S. from its traditional leadership role.

Paying the first presidential visit to Greece since Bill Clinton in 1999, Obama sought to reassure NATO allies that Trump, despite belittling the alliance during the campaign, wouldn’t abandon it. Obama said Democratic and Republican administrations had respected NATO and predicted “significant continuity even as we see a transition in government.”

Tsipras, held his tongue for the most part, noting that Trump was now the president-elect and would be a major player on the world stage. He said he knew little of Trump but had become acquainted with his “aggressive manner” during the campaign.

“I did not wish to repeat the criticisms that many of have made during the election period,” Tsipras said.