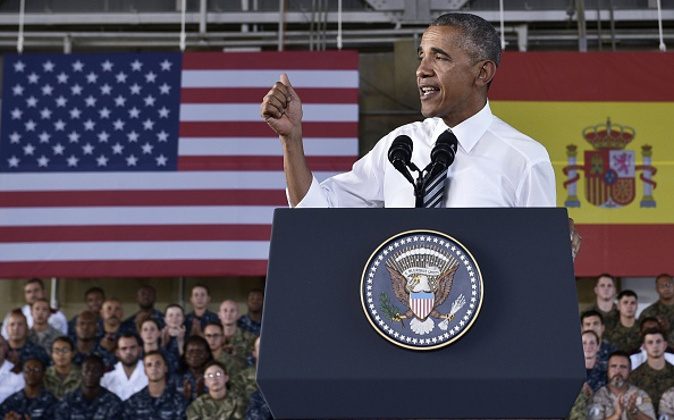 US President Barack Obama speaks to service members at the Naval Station Rota, in Rota, southwestern Spain on July 10, 2016. Obama said he will cut short a foreign trip and visit Dallas next week as the shooting rampage by the black army veteran, who said he wanted to kill white cops, triggered urgent calls to mend troubled race relations in the United States. / AFP / MANDEL NGAN (Photo credit should read MANDEL NGAN/AFP/Getty Images)
US

At one point, Obama was asked about the FBI’s email investigation of Hillary Clinton, to which he vaguely responded he wasn’t in a position to comment on it. He did, however, speak at length on the series of shootings, starting with the police shootings of several black men and later the Dallas sniper shooting that left five police officers dead on Thursday night.

The president first commended Black Lives Matter, comparing it to the abolitionist or civil rights movements, according to a live stream of his press conference.

On the other hand, Obama didn’t have positive things to say about the killing of police in Dallas, describing it as a “reprehensible crime.” He also admonished against painting all police officers with a “broad brush,” noting that the majority of police do their jobs responsibly and that such attacks will cause the Black Lives Matter movement to lose supporters.

He added there are “stupid” or “impudent” people who go over the top in getting their message across, but said the protesters too should not be lumped into one group.

“And I don’t think that you can hold well-meaning activists who are doing the right thing and peacefully protesting responsible for what is uttered in a protest site,” he says.

The president has cut short his trip in Spain a day earlier so that he can visit Dallas.

“One of the great things about America is that individual citizens and groups of citizens can petition their government, can protest, can speak truth to power, and that is sometimes messy, and controversial. But because of that ability to protest and engaging free speech, America over time has gotten better. We’ve all benefited from that,” Obama said.

He added: “The abolition movement was contentious. The effort for women to get the right to vote was contentious and messy. There were times when activists might have engaged in rhetoric that was overheated, and occasionally counter productive, but the point was to raise issues so that we as a society could grapple with them. The same was true with the civil rights movement and the union movement and the environmental movement and the anti-war movement during Vietnam. And I think what you’re seeing now is part of that long standing tradition.”