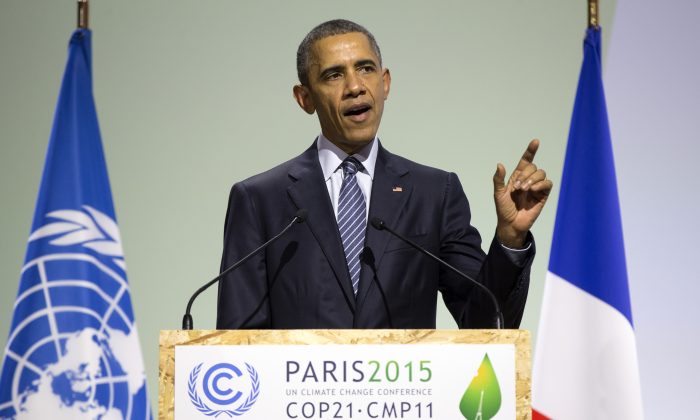 LE BOURGET, France—Pushing for a powerful climate deal, President Barack Obama called the global talks opening Monday outside Paris an “act of defiance” against terrorism that proves the world stands undeterred by ISIS-linked attacks in Europe and beyond.

Obama used his speech to more than 150 world leaders to salute Paris and its people for “insisting this crucial conference go on” just two weeks after attacks that killed 130 in the French capital. He said leaders had converged to show resolve to fight terrorism and uphold their values at the same time.

“What greater rejection of those who would tear down our world than martialing our best efforts to save it,” Obama said.

Obama’s remarks came at the start of two weeks of make-or-break negotiations to finalize a sweeping global agreement to cut carbon emissions and hopefully stave off the worst effects of climate change. Obama exhorted leaders here to fight the enemy of cynicism—”the notion we can’t do anything” about the warming of the planet.

After sketching dire threats of submerged nations, abandoned cities and ever-worsening flooding and natural disasters, Obama insisted that grim future “is one that we have the power to change.” He urged leaders to “rise to this moment,” invoking the late Martin Luther King Jr.’s observation that there’s such a thing as being too late to a cause.

“That hour is almost upon us,” Obama said.

Efforts to secure a climate deal have been hampered by a long-running dispute about whether developing nations share the same burden as industrialized nations that have historically polluted much more. The U.S. and other nations have insisted that all countries chip in under the new agreement.

“No nation—either wealthy or poor—is immune to what this means,” Obama said as he described spiraling effects of climate change if left unchecked.

Aiming to put a finer point on that argument, Obama met Monday with President Xi Jinping of China, which has started taking aggressive action to curb emissions, and planned a similar meeting later in the day with India’s Prime Minister Narendra Modi.

In his sit-down with Xi, Obama touted close cooperation on climate change as vital to world efforts on global warming, and said nowhere had coordination with Beijing been more critical or fruitful than on climate change. He credited U.S. and Chinese leadership with leading 180 nations to make their own pledges to curb emissions in the run-up to the Paris talks.

“Our leadership on this issue has been absolutely vital,” Obama said. China emits about 30 percent of the world’s greenhouse gases and the U.S. about 16 percent.

Yet Obama also invoked hot-button issues that have long vexed U.S.-China relations. The United States has complained bitterly about cyberattacks against the U.S. emanating from China, and Obama has spoken out regularly against China’s assertive moves in disputed waters in the East China Sea and South China Sea.

“Our teams have found ways to work through these tensions in a constructive fashion,” Obama said.

After their meeting, the White House said Obama had urged China to live up to commitments on cyber that Xi made when he visited the White House in September, and that Obama had “stressed the need to address regional issues, including maritime differences, peacefully and in accordance with international law.” Obama also encouraged Xi to move ahead with economic reforms that would let U.S. companies “compete fairly in the Chinese market,” the White House said.

Xi, speaking through a translator, said that global worries made it even more important for the U.S. and China to work together.

“The world economy is recovering slowly, terrorism is on the rise, and climate change is a huge challenge. There is more instability and uncertainty in international situations,” said the Chinese leader.

Killing Keystone XL, Obama Says Pipeline Not in US Interests

As the conference kicked off, the Obama administration announced it was pledging $51 million to a global fund to help poorer countries adapt to climate change. The U.S. contribution joins pledges from Germany, Canada, Italy and others to total $248 million.

The Obama administration didn’t specify where the U.S. dollars would come from. Obama has struggled to convince the Republican-run Congress to fund his climate goals, amid concerns from critics in the U.S. who say his energy plan is unattainable and could be wiped away by his successor.

During his brief trip to Paris, Obama also planned a dinner with French President Francois Hollande and a meeting with island nations hit hard by climate change before returning to Washington on Tuesday.