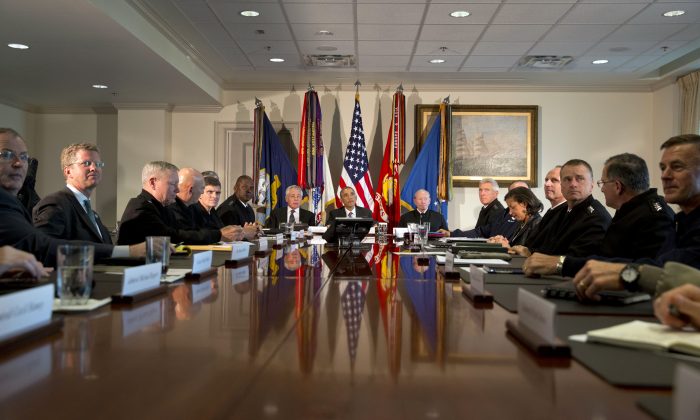 President Barack Obama (C) speaks to the media at the conclusion of a meeting with senior military leadership including Secretary of Defense Chuck Hagel (L) and Chairman of the Joint Chiefs of Staff Gen. Martin Dempsey (R) at the Pentagon on Wednesday, Oct. 8, 2014. (AP Photo/Jacquelyn Martin)
New York

WASHINGTON—Facing a stubborn enemy, President Barack Obama professed confidence Wednesday that the U.S. will keep making progress against Islamic State militants in Iraq and Syria, as the reality set in of a lengthy military conflict with limited prospects for success.

Flanked at the Pentagon by the top U.S. military brass, Obama said he was heartened to see that a broad international consensus had emerged that the Islamic State group poses a threat to the world’s security. He said nations across the globe have come to the conclusion “that their barbaric behavior has to be dealt with.”

“It remains a difficult mission,” Obama told Defense Secretary Chuck Hagel and his military commanders. “As I’ve indicated from the start, this is not something that is going to be solved overnight.”

The reality check from the commander in chief underscored growing concerns about whether the U.S.-led campaign is working. Obama has pledged to both destroy the Islamic State group andkeep U.S. ground troops out of combat — two goals that seem increasingly to be in conflict.

Two months after the U.S. began launching airstrikes in Iraq that later expanded to Syria, the Islamic State group is far from crippled. It remains in control of most of the territory it has seized in Iraq and Syria, and its fighters appear close to capturing the strategic town of Kobani near Turkey despite days of U.S.-led airstrikes.

Even as the U.S. claimed progress in the fight, the Pentagon acknowledged that Kobani could still fall and said the Islamic State group could seize additional territory elsewhere.

Unlike in Iraq, where Kurdish forces have made modest gains and the U.S. is helping rebuild the careworn military, there are few forces in Syria capable of taking the fight to the Islamic State group on the ground.

“We don’t have a force inside Syria that we can cooperate with and work with,” said Rear Adm. John Kirby, the Pentagon’s spokesman. He said the U.S. was working to train and arm 5,000 moderate Syrian opposition fighters, but that effort is in the early stages and is expected to take months.

The Islamic State group’s resilience amid an onslaught of airstrikes by the U.S. and its partners has become a pointed reminder that a military campaign fought only from the skies can only go so far.

Contesting the notion that the military would ask for ground troops, Kirby said that every Pentagon leader understood Obama’s clear instruction that U.S. ground forces won’t be returning to the Middle East to fight in Iraq or Syria. At the White House, officials conceded that air power alone would be insufficient, suggesting that the effort to oust Islamic State fighters may stay in a holding pattern until a viable fighting force emerges from the splintered and poorly equipped Syrian opposition.

“There are limitations associated with the exclusive use of air power,” White House spokesman Josh Earnest said. “That is the situation that we’re operating in.”