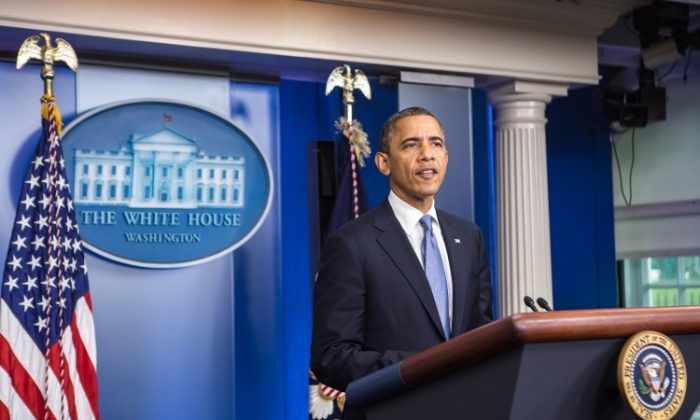 U.S. President Barack Obama makes a statement in the White House briefing room following a briefing on Hurricane Sandy on Oct. 29, 2012, in Washington, DC. The president has cancelled a third day of campaigning to focus on emergency operations for the hurricane. (Brendan Hoffman/Getty Images)
US

President Barack Obama has canceled a third day of campaigning to focus on emergency operations implemented in the aftermath of Hurricane Sandy.

The Obama for America campaign issued a notice Tuesday morning stating that Obama would not be attending the Ohio campaign events.

“The president will remain in Washington, D.C., on Wednesday to monitor the response to Hurricane Sandy and ensure that all available federal resources continue to be provided to support ongoing state and local recovery efforts,” a White House representative said in a statement.

At the request of governors, the president had, overnight, made disaster declarations for New York and New Jersey.

Obama was briefed by Fugate on the coordination of FEMA operatives with the National Guard, and state and local authorities, according to a White House statement.

The president expressed sadness over the loss of life associated with the storm.

He also stressed that while the primary focus should be on the “immediate lifesaving and life sustaining activities,” all efforts should be made to “support state, local, and private sector efforts to restore power,” the statement said.