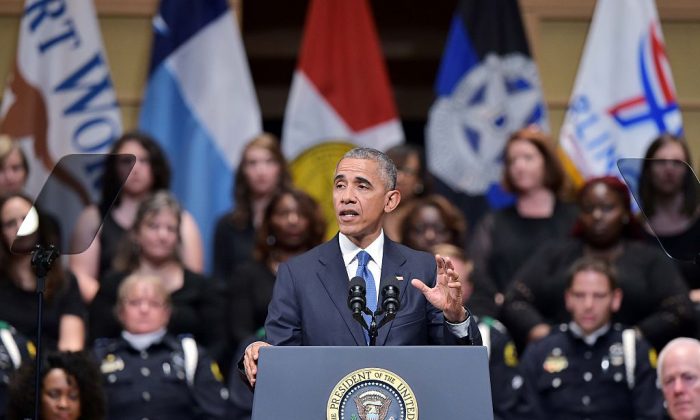 US President Barack Obama speaks during an interfaith memorial service for the victims of the Dallas police shooting at the Morton H. Meyerson Symphony Center on July 12, 2016 in Dallas, Texas. President Barack Obama attended a somber memorial Tuesday to five police officers slain in a sniper ambush in Dallas, as he seeks to unify a country divided by race and politics. / AFP / Mandel NGAN (Photo credit should read MANDEL NGAN/AFP/Getty Images)
US

President Obama called for unity in America during a live-streamed speech on July 12 after the deadly shooting of police officers in Dallas.

Obama visited the city five days after a deadly sniper attack killed five officers during a protest against police shootings. Seven other officers were injured, as well as two civilians.

The president spoke at an interfaith memorial service at the Morton H. Meyerson Symphony Center in front of families of the fallen police officers and members of the Dallas community.

“These men and their families shared a commitment to something larger than themselves,” said President Obama about the slain police officers, adding that they put their lives in harm’s way.

The president spoke about the victims, one of whom had bought dinner for a homeless man the night before the attack. Another was married just two weeks ago.

He also pointed out that Dallas police stood side by side with protesters before the attack. The department had uploaded pictures to social media of policemen with a protester. They also protected demonstrators when the shooting began.

When the president told the crowd about a mother who was shot and injured, but now her son wants to be a police officer, a standing ovation ensued. Shetamia Taylor, who had taken her four sons to the protest, was shot and injured by the sniper. Police protected Taylor from more harm and quickly took her to the hospital. Now, her 12-year-old son wants to be a police officer.

Obama also commended the Dallas Police Department for the decrease in murder rates over the past years, as well as fewer cases of excessive force.

“Dallas Police Department has been doing it the right way,” he said.

Obama noted an “overwhelmingly” large number of police officers are doing a good job, and agreed with Dallas Police Chief David Brown’s remarks on Monday on how people ask the police force to do too much.

He also spoke of the racial divide in America, saying that discrimination didn’t vanish after segregation and that bias remains, calling for unity.

Obama said people are mourning for the slain officers, as well as Alton Sterling and Philando Castile, who were both killed in police shootings last week.

“Those of us who love Dallas and call it home have lost five members of the family,” he said.

Dallas Mayor Michael Rawlings spoke about the strength of his city, while Police Chief Brown recited the Stevie Wonder song “I’ll Be Loving You Always.”

The Obamas were scheduled to meet privately with families of the police officers who were killed, and talk to those who were injured.

Meanwhile, in a surprising show of unification, Sen. Ted Cruz (R-Texas) traveled to Dallas with President Barack Obama aboard Air Force One on Tuesday, the senator’s office confirmed.