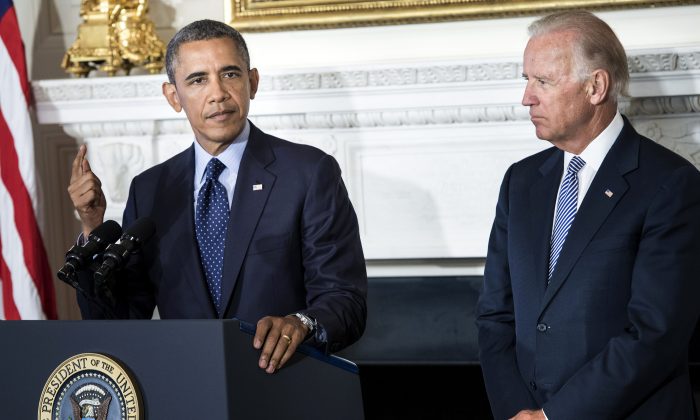 Following a morning meeting with his cabinet, Obama said he had directed them to adopt an aggressive management agenda to find faster and more efficient ways to deliver services.

“As anyone knows, dealing with the federal government is not always high tech, and it’s not always user-friendly. So over the past four and a half years, we’ve worked diligently to change that,” he said, speaking from the State Dining Room in the White House. “We are the first to confess that progress does not always come quick and major challenges still remain.”

He described strategies used by the Federal Emergency Management Agency (FEMA) as examples of more efficient delivery of services. FEMA agents now use satellite data and aerial imaging to determine areas in need of assistance, rather than on the ground inspections, and FEMA agents use iPads to help people sign up for disaster relief on the spot.

Over $2.5 billion has already been saved through waste reduction, he said, and there are more reductions by cutting obsolete processes and duplication to come.

According to Obama, increased access to government data on Data.gov,
has created entrepreneurial opportunities, as well as facilitating processes like applications and inquiries.

“We’ve made huge swathes of your government more efficient, more transparent and more accountable than ever before,” he said.

Obama said progress had been good, and “now we need to do more.”

Sylvia Mathews Burwell, presently the director of the Office of Management and Budget (OMB), has been appointed to lead cabinet efforts to streamline government processes, he said. Government officials will also be supported by 40 “presidential innovation fellows,” who are technological innovators from the private sector who will apply their experience to government.

Jay Carney, White House spokesperson, said Obama was not only looking to improve efficiency during his term but had taken a long-term view.

“The objectives here are not about the next three and half years,” he said at a press briefing, “the goal is to substantially improve the efficiency and effectiveness of federal government over five, ten years and beyond.”