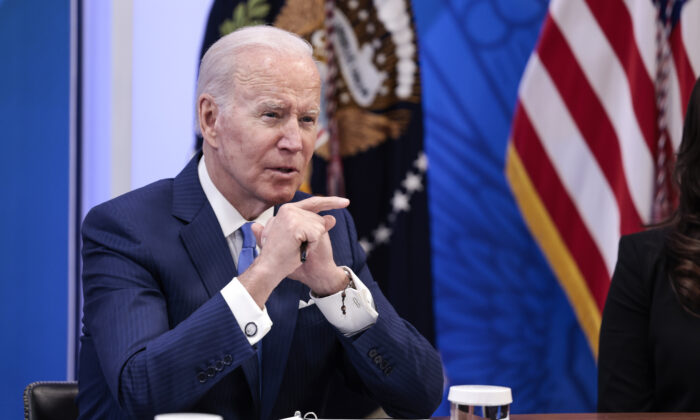 As President Joe Biden considers some form of loan forgiveness for college borrowers, student loans in America have been a slow-boiling crisis for almost a decade now.

One expert critic who has been following the crisis lays much of the blame for the $1.6 trillion loan debacle at the feet of two men at the very top of the U.S. government: former President Barrack Obama and Biden.

“This is far worse than the Savings and Loan crisis, or the sub-prime auto crisis and even the subprime mortgage crisis,” Allen Collinge, author of the book “The Student Loan Scam: The Most Oppressive Debt in U.S. History and How We Can Fight Back,” told the Epoch Times.

“These two guys are some of the people most responsible for permanently saddling so many Americans with debt for which they have no way out but dying,” Collinge added.

Two factors have come together, said Collinge, to create what he calls the biggest loan crisis in U.S. history.

The first was the removal of bankruptcy protections that people enjoy from all other debt in America.

“Among all living, serving elected officials, Biden literally is most culpable for removing bankruptcy protections from these loans, which really is the core of this problem,” said Collinge, who runs an organization called Student Loan Justice, which is seeking cancellation of all student loan debt in return for the end of the federal student loan program.

Serving as a member, and then eventually, as the chairman of the Senate Judiciary Committee, Biden was instrumental in removing bankruptcy protection from, at first, government-backed student loans, and then, from privately-made student loans.

“Joe Biden bears a large amount of responsibility for passage of the bankruptcy bill,” Ed Boltz, president of the National Association of Consumer Bankruptcy Attorneys, told International Business Times in 2015.

To get students to borrow more, Obama pulled out all the stops, as the Congressional Budget Office (CBO) claimed the move to federalization would save the country $60 billion.

“This is great for the country,” Then-Education Secretary Arne Duncan told NPR in an interview at the time the measure was approved.

“It’s one of these sort of miraculous, once-in-a-lifetime opportunities, and we could put $60 billion minimum there behind students simply by removing subsidies to banks and not going back to taxpayers for another dime,” Duncan added.

Then the president sent out First Lady Michelle Obama as the face of an effort which the Obama White House called “Reaching the ‘North Star’ by 2020,” which encouraged everybody to go back to some sort of higher education institution and get another degree, financed of course, by the U.S. government.

Students were encouraged to take out student loans that were termed by the White House “financial aid eligibility that can make college affordability a reality.”

During the Obama years, student loans climbed from about $700 billion to nearly $1.4 trillion, edging out credit card debt by 2012.

Prospective students were told to host their own “signing-day” party where they signed up with a college, university, or vocational school for higher education, just like college football players and basketball players do when they signed on with schools.

The signing day came with its own 16-page instruction booklet from the White House that told students “an education is worth way more than just a higher paycheck—it’s the most valuable asset a person can ever have. It is something they will have their entire life.”

One question that remained unanswered in those books, however, was how students would pay off their debt.

Increasingly, it looks like student loan debt is debt that will follow students their entire life; a debt that has turned that “asset” the White House told them to prize, into a millstone around students’ necks.

And that $60 billion in savings that was forecasted by the CBO that then-Education Secretary Duncan was touting? It turns out that instead of saving the country $60 billion, it cost $400 billion, not including any loan forgiveness.

“CBO miscalculated the cost of the Healthcare and Reconciliation Act [that federalized student loans] by $503 billion, before factoring in President Biden’s student loan bailouts. Congress may not have passed this bill had CBO appropriately scored it,” House Republicans wrote in a letter this week to CBO Director Philip Swagel, demanding to know how the CBO got the figures so wrong.

The Epoch Times has reached out to the White House, CBO, and Obama for comment.

The Obama-Biden Legacy Comes Due

According to figures gathered by Collinge that he gleaned from the Department of Education (DOE), 63 percent of all money borrowed in student loans are from people over the age of 35, who on average owe $41,900 worth of debt.

“The big growth in loans has been in graduate schools,” Jason Delisle, now a research fellow at the Urban Institute think tank, told PBS in 2017, sounding an early alarm bell.

“Yet there’s just no heat on what are people getting for these degrees. On the undergraduate side, there are loan limits and concern around defaults and earnings. On the graduate school side, there’s none of that,” added Delisle.

And graduate studies are big money makers for schools, often making the difference between being profitable and closing down, say some experts.

Even before the pandemic hit, the DOE said only one in four borrowers were paying down both principal and interest on loans.

While it’s bad in every state, especially hard hit by student borrowing are the states of the Deep South.

The worst-hit is Mississippi where the debt to income for student loans is nearly 1:1.

According to Collinge, what makes this loan crisis different than, say, the Savings and Loan crisis of the 1980s or the subprime mortgage crisis of the 2000s is the unlimited collection powers of the federal government, the lack of any statute of limitations on the debt and the fact that the debtors have no recourse to bankruptcy protections that our Founders intended them to have.

As of today, the principal balance is still $132,174 for this 59-year-old woman facing retirement shortly.

“The harm caused by this predatory lending system created by Biden—and others—and exacerbated by Obama, is particularly acute for seniors, who are seeing their social security and disability income garnished, often despite having repaid far, far more than they originally borrowed,” said Collinge.

This failure to disclose the actual terms upon which borrowers are taking out loans was a great concern to the federal government during the subprime mortgage crisis that saw the government take action against mortgage lenders who paid fines of over $234 billion for actions that are essentially fraudulent, with at least 59 bankers going to jail.

But somehow, when the federal government started loaning the money to students, those same rules stopped applying.

“If any other lending system did this, it would be criminal, people would be in handcuffs,” concluded Collinge.

So as the argument rages in Congress about whether student loans should be forgiven, or go into collection, Collinge wants people to remember one simple thing: Stop listening to the people who actually caused the problem to begin with.