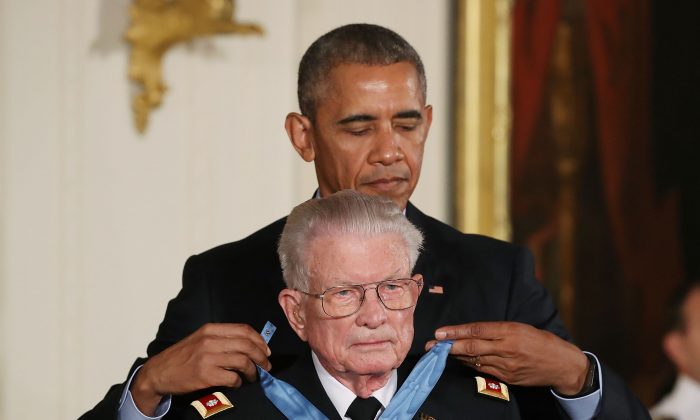 WASHINGTON, DC - JULY 18: U.S. President Barack Obama presents the Medal of Honor to retired Army Lt. Col. Charles Kettles, during a ceremony in the East Room at the White House July 18, 2016 in Washington, DC. Kettles who was a UH-1D Huey helicopter pilot during the Vietnam War displayed extraordinary heroism, and is credited with saving the lives of 40 soldiers and four of his own crew members. (Photo by Mark Wilson/Getty Images)
Life & Tradition

Retired Lieutenant Colonel Charles Kettles, who served in the Army during the Vietnam War, was awarded the Medal of Honor by President Barack Obama on July 18 for saving the lives of more than 40 soldiers.

Meritorious conduct deserving of the award, which is the nation’s highest military honor for valor, “must involve great personal bravery or self-sacrifice so conspicuous as to clearly distinguish the individual above his or her comrades and must have involved risk of life,” according to a White House statement.

Kettles, a UH-1 helicopter commander, led a flight of six helicopters carrying reinforcements to U.S. soldiers, and to carry off wounded personnel near Duc Pho, Republic of Vietnam, in May 1967, according to the U.S. Army’s website. As the flight prepared to land, several soldiers were hit and killed before they could board the helicopters.

Kettles led the wounded out of the battle area and back to the staging area to pick up additional reinforcements. He then went back to the battlefield—knowing full well the danger he would face—to save the lives of 40 soldiers and four of his own crew members—without benefit of artillery or tactical aircraft support.

The Army said his helicopter was hit by a mortar round that damaged the tail boom, a main rotor blade, shattered both front windshields, and the chin bubble. Additionally, rifle and machine gun fire bombarded the helicopter.

“In spite of the severe damage to his helicopter, Kettles once more skillfully guided his heavily damaged aircraft to safety,” stated the Army website, noting Kettles’s “complete disregard for his own safety” during the mission. “Without his courageous actions and superior flying skills, the last group of soldiers and his crew would never have made it off the battlefield.”

“I didn’t do it by myself,” Kettles, 86, said in a video released by the U.S. Army. “There were some 74 pilots and crew members involved in this whole mission that day. So it’s not just me.”

President Obama indicated great pride in Kettles’s bravery, saying on Twitter, “44 men came home because Chuck Kettles believed that we leave no man behind. That’s America at our best.”

44 men came home because Chuck Kettles believed that we leave no man behind. That’s America at our best. https://t.co/UymO2AaRHg

“It should be a creed for all of us,” Obama said at the White House ceremony. “This is a country that’s never finished in its mission to improve, to do better, to learn from our history, to work to form a more perfect union. And at a time when, let’s face it, we’ve had a couple of tough weeks, for us to remember that goodness and decency of the American people and the way we can all look out for each other, even when times are tough, even when the odds are against us, what a wonderful inspiration.”