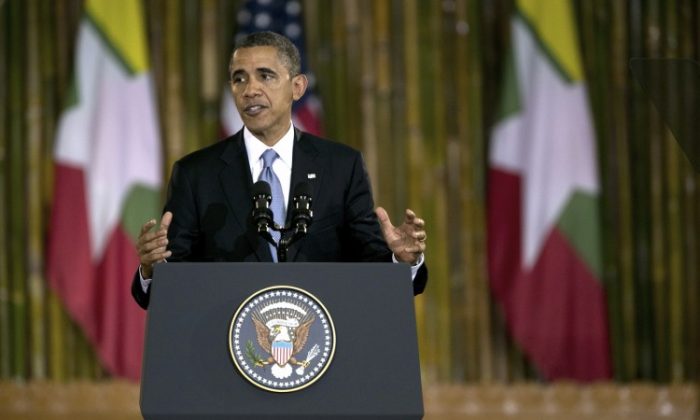 President Obama’s visits to Thailand, Burma, and Cambodia this week fulfill key pillars of his administration’s strategy in the region, the culmination of an approach toward the Asia Pacific formulated by Obama in the early days of his presidency, says a key adviser to the president on national security issues.

Speaking in Washington on the eve of the president’s trip, National Security Adviser Thomas Donilon said a rebalancing toward Asia—referred to as the “Asia pivot”—had developed from a request by Obama in his first days as president for a strategic assessment of “America’s footprint” in the world.

“It was the president’s judgment that we were over-weighted in some areas and regions, such as our military commitments in the Middle East, and at the same time we were significantly underweighted in some regions, including and specifically the Asia-Pacific region,” he said.

Armed with this assessment and a strong affinity to the region—having spent four years in Indonesia as a child—it was Obama who pushed for rebalance in Asia.

“The president made a critical decision … at the very outset of the administration to increase our focus on the Asia-Pacific in terms of resources, diplomatic effort, engagement both with nations, and with regional institutions, and in terms of policy,” Donilon said.

The present visit to Asia, the first overseas tour for President Obama following his re-election and the fifth trip to Asia in four years, highlights the importance the president places on the Asia-Pacific and marks “the beginning of the next phase of our rebalancing effort,” Donilon said.

Obama spent Sunday in Thailand, reaffirming a relationship with the United States that goes back 180 years. He met with Thai Prime Minister Yingluck Shinawatra before visiting ailing Thai king Bhumibol Adulyadej, 85, who, after military coups and political upheavals in 2010, remains a powerful unifying force within the country.

The president commended the democratic government of Thailand, responding carefully to Thai media who questioned its government’s commitment to democracy amid concerns of accountability, human rights abuse and political prisoners.

On Monday he flew to Burma, (also known as Myanmar) where he met with President Thein Sein, a retired general responsible for opening Burma to democratic reforms unthinkable two years ago. He also visited elected member of Parliament and opposition leader Aung San Suu Kyi in her home, where she had spent the best part of 15 years under house arrest, and delivered a speech to the people from Yangon University.

In the speech he outlined the importance of reforms in Burma and acknowledged the challenges ahead, including corruption, human rights violations, and ethnic conflicts. Addressing the difficulties in unifying diverse ethnic groups, Obama said the United States was also a country of diversity and described some of the difficulties America had endured.

“Once the color of my skin would have denied me the right to vote. And so that should give you some sense that if our country can transcend its differences, then yours can, too,” he said.

Obama said that he talked about America’s struggles to encourage Burmese to pursue their own freedoms.

“That is how you must reach for the future you deserve—a future where a single prisoner of conscience is one too many,” the president said, according to a White House transcript. “You need to reach for a future where the law is stronger than any single leader … where no child is made to be a soldier and no woman is exploited, and where the laws protect them even if they’re vulnerable.”

In Cambodia, he attended a regional meeting with leaders of the 10-member nations of the Association of South East Asian Nations (ASEAN), reaching agreement on an annual summit between the United State and the regional group, and a number of strategic and economic initiatives.

On Tuesday he was due to attend the East Asia Summit, participating for the first time as a full member in the ASEAN offshoot. The East Asia Summit is seen by the Obama administration as a potential forum to discuss strategic and security issues, something lacking in the region, U.S. analysts say.

Donilon said reaffirming alliances in Thailand, encouraging democratic reform in Burma and supporting regional institutions like the EAS and ASEAN are important aspects of the Obama administration’s strategy in the Asia Pacific.

“In this sense the trip really is a microcosm of the key elements of our approach to the region,” he said.

Energizing and strengthening alliances, which he described as a “unique American asset,” deepening ties with emerging countries like India and Indonesia, and strengthening regional architecture represented three of five “lines of effort” in the administration’s engagement with Asia, Donilon said.

The fourth was “advancing the region’s economy architecture,” according to Donilon, referring particularly to the “high standard Trans Pacific Partnership” (TPP), which has grown from 7 members to 11 members since forming last year, and is set to expand further.

“We seek an open international economic system where rules are clear and every nation plays by them,” Donilon said of U.S. aims.

Establishing a constructive relationship with China is the fifth line of effort. Donilon admitted that the relationship was “complicated,” “multidimensional” and involved “two systems that are very different.”