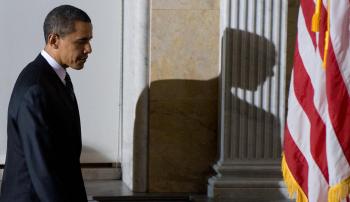 Samuel Spencer
View profile
Follow
biggersmaller
Print
President Barack Obama went on an Arab television station for his first television interview with a foreign station on Tuesday, breaking new ground in reaching out to the Arab world and Muslims.

The interview was broadcast on Al-Arabiya, a 24-hour Arabic-language channel that is based out of Dubai in the United Arab Emirates.

In the historic interview, Obama said, "My job to the Muslim world is to communicate that the Americans are not your enemy."

The move was seen as a reconciliatory one meant to bring America's standing with the rest of the world back up to par, reversing the unpopular policies of President George Bush over the last seven years.

“All too often the United States starts by dictating—in the past on some of these issues— and we don't always know all the factors that are involved. So let's listen,” said Obama.

Over the last few years, America's popularity and positive standing has fallen in countries across the world, except for India and Nigeria. It was particularly fallen in Arab countries. Recent polls have shown that Arabs are more optimistic with Obama in the White House.

Obama offered reconciliatory moves towards Arab nations, including Iran, saying, “If countries like Iran are willing to unclench their fist, they will find an extended hand from us.”

Part of Obama's outreach to the Arab nations appears to include an address in a major Islamic country in upcoming months.

But Obama also struck a hard tone in terms of dealing with Islamic extremism. Obama said: “I cannot respect terrorist organizations that would kill innocent civilians and we will hunt them down.”

As noted in his speech, Obama has Muslims in his family. Obama spent part of his life growing up in Indonesia, a Muslim country.

Key to Obama's plan to strike a reconciliatory tone with the Mideast nations is the appointment of George Mitchell, a diplomat who formerly worked on the North Ireland conflict and sectarian violence there.