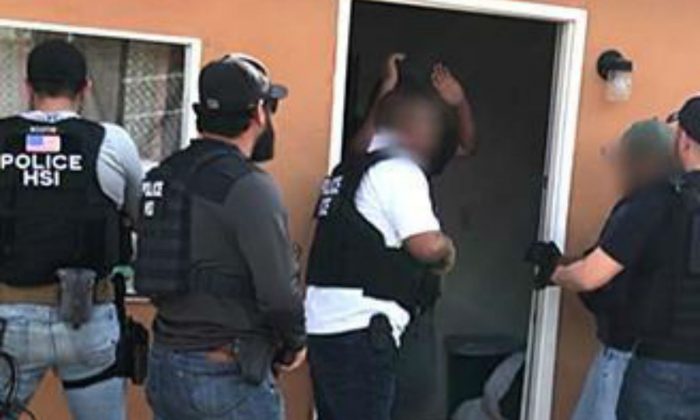 ICE arrested a Mexican man on alien smuggling charges after executing a search warrant at a home in Texas and finding over 50 illegal aliens. (ICE)
Politics

U.S. District Judge Indira Talwani granted a preliminary injunction that orders ICE “from civilly arresting parties, witnesses, and others attending Massachusetts courthouses on official business while they are going to, attending, or leaving the courthouses.”

The order is the first in the nation to halt immigration arrests across an entire state, Oren Nimni, an attorney for Lawyers for Civil Rights in Boston, told the left-leaning Boston Globe.

The injunction was granted amid a court battle launched by Suffolk District Attorney Rachael Rollins and Middlesex District Attorney Marian Ryan, who filed a lawsuit seeking to block the arrests at courthouses of those illegally in the country. ICE had asked the request for a preliminary injunction to be blocked.

In the 29-page ruling, Talwani said district attorneys have claimed that ICE has undermined their jobs and also clarified that the decision would not block ICE from arresting people brought to courthouses in the state while in state or federal custody.

The ruling was “in the public interest,” she added.

ICE told the Globe that it was reviewing the ruling and had no comment.

According to Law360, Talwani, who was nominated in 2013, complained on April 25, 2018, while presiding in court that a federal prosecutor “should have stopped” ICE officers, who were in plainclothes and attending the sentencing of a Chinese national who had admitted to visa fraud, from arresting the student after she exited the courthouse after being sentenced to one year of probation.

“I am upset at the notion that ICE thinks a courtroom is a place to go and pick up people,” Talwani said. “I see no reason for places of redress and justice to become places that people are afraid to show up.”

The Center for Immigration Studies said that the comments should have disqualified Talwani from taking the case.

“Judge Talwani’s own statements call into question her impartiality, and suggest that she may have already made up her mind on the issue of ICE courthouse arrests. Simply put, she is against them, as the statements above would appear to indicate,” the group said.

Ryan, the prosecutor who joined the lawsuit, praised the ruling, issuing a statement that: “The granting of this injunction is a critical step in the right direction for our Commonwealth and it should be a model for our nation.”

Ryan and Rollins had brought criticism from President Donald Trump with the lawsuit.

Trump called into “The Adriana Cohen Show” in May to slam the prosecutors.

“These are people that probably don’t mind crime, they don’t mind what’s going on,” Trump said, reported the Boston Herald. “You look at MS-13, they say in the world there’s nothing more evil. These are some very, very bad people. To try and protect them, I don’t think so.”

Trump then took aim at Rollins for saying “it would be my honor” to be arrested for assisting illegal immigrants in escaping from arrest by ICE agents.

A Massachusetts judge was charged in April for allegedly helping an illegal immigrant sneak out of a courthouse to evade an ICE agent.

It was later revealed that $127,000 of Joseph’s legal fees were paid by taxpayers. Joseph’s representation also asked for her to receive pay while the criminal case unfolds.