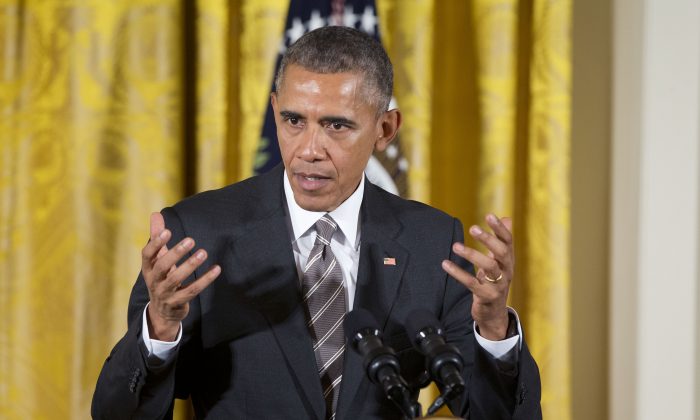 President Barack Obama speaks in the East Room of the White House in Washington, Wednesday. Obama apologized to Doctors Without Borders president for attack on Afghan medical clinic. (AP Photo/Pablo Martinez Monsivais)
US

Obama Apologizes to Aid Group for US Attack on Afghan Clinic

WASHINGTON—President Barack Obama apologized to Doctors Without Borders on Wednesday for the American air attack that killed at least 22 people at a medical clinic in Afghanistan, and said the United States would examine military procedures to look for better ways to prevent such incidents.

Obama’s phone call to the group’s international president, Joanne Liu, came just a day after the White House had stopped short of an apology, waiting to learn more while acknowledging that the attack was a U.S. mistake. White House spokesman Josh Earnest said Obama offered condolences to the group’s staff and pledged a “transparent, thorough, and objective accounting of the facts.”

“When the United States makes a mistake, we own up to it, we apologize where appropriate, and we are honest about what transpired,” Earnest said. He described the call as a “heartfelt apology.”

Liu confirmed the apology. In a written statement, she reiterated her organization’s call for the U.S. government to consent to an independent investigation “to establish what happened in Kunduz, how it happened, and why it happened.”

Emerging details about the erroneous strike have only fueled growing condemnation by Doctors Without Borders and other aid groups in the four days since the clinic in the northern city of Kunduz came under fire, killing civilian workers and patients. After initial confusion, officials determined the United States had carried out the strike, an admission that complicates delicate U.S. efforts in Afghanistan as Obama weighs how many troops to leave there.

Obama told Doctors Without Borders that the United States would review the attack to determine whether changes to U.S. military procedures could reduce the chances of a similar incident. Obama also spoke to Afghan President Ashraf Ghani to convey condolences and praise Afghan forces for securing Kunduz, the White House said. Taliban fighters had seized control of Kunduz for three days last week.

Investigations by the United States, NATO, and the Afghan government are underway, but Doctors Without Borders has called them insufficient and demanded the independent fact-finding mission. Without addressing that demand, the White House offered assurances that the Pentagon would dutifully carry out its internal probe.

Doctors Without Borders has also said that the strike may have been a war crime and has described it as an attack on the Geneva Conventions governing humanitarian treatment during war. But the White House urged patience while the Pentagon works to establish what transpired.

Asked whether the apology signified U.S. culpability for loss of life, Earnest said individuals would be held accountable if necessary.

U.S. officials have declined to discuss most circumstances of the blunder, and it’s not yet clear whether the strike exceeded the rules applying to American forces operating in Afghanistan. But the top U.S. commander in Afghanistan, Gen. John F. Campbell, has said that Afghan forces fighting to retake Kunduz from the Taliban had requested U.S. air power, and that a U.S. special operations unit in the “close vicinity” was communicating with the crew of the heavily armed AC-130 gunship that pummeled the hospital.