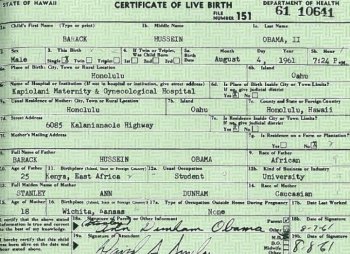 President Obama on Wednesday released the long form version of his official birth certificate that his lawyers procured from the Hawaii State Department of Health in an attempt to silence the increasingly vocal "birther" movement that questions Obama’s birth place. [View the long form birth certificate on the White House website here.]

In a brief speech at the White House, President Obama said he was "puzzled" and has "watched with bemusement" as the media and the conservative-leaning "birthers" challenge whether he was born in the United States.

In 2008, Obama’s campaign released the now-president’s short form birth certificate, which Obama’s team and the White House have repeatedly said is sufficient for legal purposes.

That didn’t seem to satisfy the "birther" movement, which has gained momentum, with prominent Republicans such as Donald Trump joining the ranks.

Obama lambasted the controversy as a distraction, saying that he and other American leaders can’t "solve problems" if "we are distracted."

The president also criticized the press, pointing to the budget debate two weeks ago as a time when the "birther" controversy was overshadowing what Obama considered more substantial debate.

"When the Republican House had put forward a budget that will have huge consequences potentially to the country, and when I gave a speech about my budget and how I felt that we needed to invest in education and infrastructure and making sure that we had a strong safety net for our seniors even as we were closing the deficit, during that entire week the dominant news story wasn’t about these huge, monumental choices that we’re going to have to make as a nation. It was about my birth certificate," he told reporters at the White House.