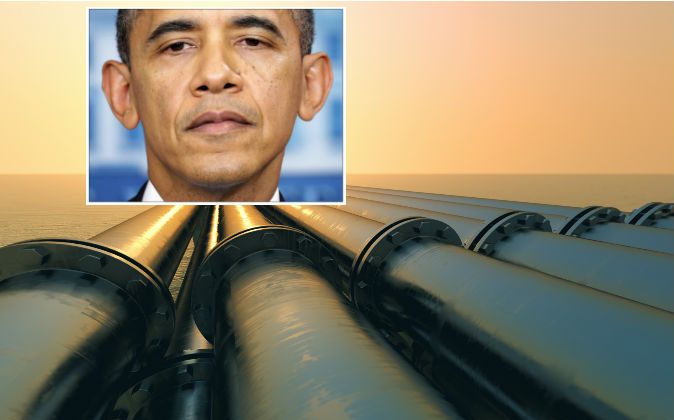 Obama and Declining US Dependence on Imported Oil and Gas

Candidate Obama was faced with major energy challenges in 2008. They ranged from the reality that replacing fossil fuels with renewable energy would take decades to the fact that security of oil supplies would remain a long-term problem. A commonly shared perception at the time was that not only was U.S. oil and natural gas production declining but that global oil reserves were becoming scarcer. Public concern about global warming was also strong and needed to be addressed.

From the outset, President Obama had a green agenda, and he was convinced that the United States had to take a leading role in the global energy transition away from fossil fuels to renewable energy. While the outlook for future U.S. oil and gas production looked grim at the time he took office, the president elect believed that if the United States were to succeed in taking the leadership role in the move to a new clean energy economy, the nation would lead the twenty-first century global economy.

In order to achieve his goal of creating a new clean energy economy, Obama’s energy agenda in 2008 focused on reducing oil imports and fossil fuel use in general, promoting renewable energy through tax credits and direct subsidies, enhancing energy security, and taking a leading role toward a global agreement on CO2 emissions. To achieve these goals, all energy and environment agencies in the U.S. government were to be staffed with strong advocates of clean energy and environment.

The global economic crisis of the time enabled the president to allocate $80 billion in funds from the stimulus program for the development of renewable energy sources and to improve energy efficiency in all sectors of the economy. The funding helped create jobs and led to an expansion of solar and wind power until the special program that headed the initiative ran out of money. The administration failed to get a cap and trade bill to cut CO2 emissions passed in the House of Representatives, but it made a commitment to cut such emissions by 17 percent in 2020 at the Copenhagen Summit in December 2009.

In the meantime, it had become apparent that less than two years into the first Obama administration the oil and gas industry, without help from the administration, had achieved major successes in economically producing shale gas and tight oil. Government as well as industry projections turned very optimistic about continued tight oil and shale gas production growth. Counter to the pre-2008 assessments calling for major imports of LNG and a continued surge in oil imports, natural gas imports began to decline and facilities were built to export LNG in the future. Oil imports also began to decline due to stagnant demand and an increase in tight oil production of almost four million b/d (larger than the entire oil production of either Iran or Iraq) between 2008 and 2014.

The administration’s original perception of growing energy scarcity during Obama’s first term in office has almost been entirely reversed during his second term. Obama’s energy policy has evolved from an aggressive pursuit of environmentalism to a somewhat more pragmatic adaptation to the realities of emerging oil and gas markets in the United States. The administration has remained opposed to hydrocarbon fuel but has slowly begun to accept the shale gas production explosion as a bridge fuel to alternative green fuels. The abundance of low-cost shale gas has enabled the president to act strongly against older polluting coal-fired power. Since the sun does not always shine and the wind does not always blow, natural gas is now seen as an intermediate supplementary source of fuel until better batteries will be able to store wind and solar energy.

The domestic energy situation in the United States has also dramatically changed since the first year of the Obama administration. Net crude oil and product imports have been halved between 2007 and 2014 to about five million b/d and continue to decline. As for natural gas imports, net LNG and pipeline gas imports are down by almost two thirds since 2007. Obama can claim that during his tenure in office U.S. dependence on imported oil and natural gas has been reduced significantly, though this shift is largely due to the private sector operating on private rather than federal lands. Obama’s biggest contribution has been the passing of new Corporate Average Fuel Economy (CAFE) standards, which are already having an impact on automobile efficiency and will continue to reduce gasoline consumption in the United States for many years to come. A combination of initial market forces and later EPA implementation of the Clean Air Act has reduced U.S. CO2 emissions, a trend that is expected to continue. The administration expects to play a leading role at the Paris Climate Conference in 2015.

The success in reducing U.S. oil imports by about 50 percent since 2008 has had a positive impact on global oil prices. There is little doubt that without the increase in U.S. oil production oil prices would have been higher in recent years. Geographically, the decline in U.S. oil and other liquids imports has not been spread evenly. The biggest decline (about 50 percent) was from non-OPEC countries. Oil imports from OPEC producers, including the Persian Gulf countries, are down by about 40 percent, and imports from Saudi Arabia have declined by only 13 percent between 2008 and 2013. The main reason for the differences between the Persian Gulf countries and, for example, Nigeria and North Africa is related to the gravity and sulfur content of crude oil. The incremental U.S. crude oil production is light and sweet oil, replacing similar oil from OPEC and non-OPEC countries. The Persian Gulf countries produce a heavier and sourer crude oil, which is a desirable crude oil for sophisticated upgrading refineries in Texas. In addition, Saudi Arabia is the part owner of the Motiva refinery in the United States, which has a capacity of 600,000 b/d. These refineries use primarily Saudi crude oil. And, by August of 2014, net crude oil and product imports from Canada had become almost one third higher than net crude oil and product imports from the Middle East.

U.S. production of tight oil and conventional oil from the Gulf of Mexico will continue to be a major driver for several more years, further reducing U.S. net crude oil imports. It should be noted, however, that since the summer of 2014, oil prices have dropped by about $25 a barrel to around $75 a barrel. It is not yet clear what will happen to U.S. tight oil production after 2014 if the current or lower oil prices prevail for several years. While most oil analysts are cautiously optimistic that at $80 a barrel U.S. tight oil production will continue to increase, albeit at a slower pace, they do not exclude a slowdown in production growth or temporary stagnation until oil prices increase again. Lower oil prices will also impact the production of Canadian non-conventional oil, most of which is exported to the United States. The administration can positively impact the growth in tight oil and shale gas production by making more federal land available to the industry and minimizing federal interference on the development of oil and gas on private land. It is feared that local objections to fracking may lead to additional federal government regulations. …

Continue reading this article at the Middle East Institute. Republished with permission.