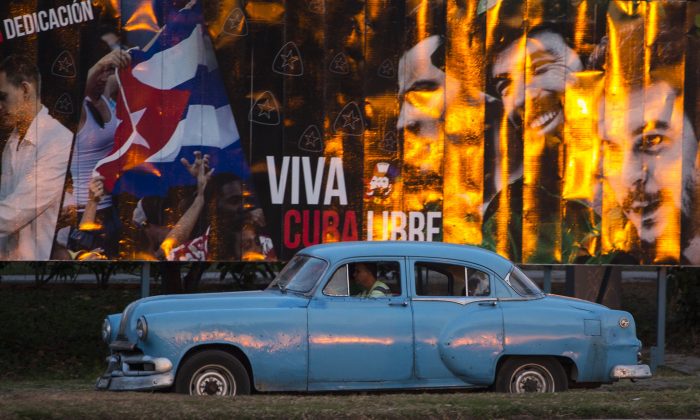 HAVANA—The Obama administration punched a new series of holes in the U.S. trade embargo on Cuba on Tuesday, turning a ban on U.S. tourism to Cuba into an unenforceable honor system and paving the way for Cuban athletes to one day play Major League Baseball and other U.S. professional sports.

Five days ahead of the first presidential trip to Havana in nearly 90 years, the U.S. also eliminated a ban on Cuban access to the international banking system. The inability to send or receive payments that passed even momentarily through the U.S. banking system had crippled the country’s ability to trade with third countries and became a major hindrance to the U.S. attempt to normalize relations with Cuba.

“The simple basis of our policy is that by loosening these restrictions we are better able to engage with the Cuban people, to support them and to build bridges between our two countries ,” deputy national security adviser Ben Rhodes said. “We deeply believe that this is in America’s national interest.”

The Cuban government made no immediate comment on the measures.

Tuesday’s announcement allows Cuban citizens to earn salaries in the United States as long as they don’t pay special taxes in Cuba, specifically mentioning athletes, artists and performers as potential beneficiaries. Until Tuesday, only Cubans who had begun the process of emigrating to the U.S. could legally earn money in the United States beyond a tiny living stipend.

Major League Baseball is negotiating with both the U.S. and Cuban government to create a legal means for Cuban baseball players to play in the U.S. without having to abandon their country, eliminating the need for some of the world’s highest-priciest baseball talent to use human traffickers to get to the major leagues.

As for ordinary Americans, they can now take “people-to-people” educational trips to Cuba on their own instead of joining expensive group tours. That means any American can legally go to Cuba after filling out a form asserting that their trip is for educational purposes instead of tourism. Although they’ll be required to keep records for five years about what they did in Cuba, they won’t have to submit them to the government unless asked.

The Obama administration had previously allowed independent travel for specific purposes like supporting religious organizations or participating in sports events. Tuesday’s move was expected to have much greater impact because the definition of educational travel is so amorphous that it can include virtually any activity that isn’t lying on a beach drinking mojitos.

U.S. leisure travel to Cuba nearly doubled last year, to more than 160,000 visitors, and Tuesday’s measure is expected to add another increase of between 10 and 20 percent, helping fill seats on as many as 110 commercial flights a day starting later this year.

“It’s the closest thing to straight-away travel,” said Tom Popper, president of insightCuba, one of the largest companies organizing U.S. travel to Cuba. “The message to most Americans that the travel restrictions are really loosening will come across more clearly. I think we’ll see another surge in interest.”

The elimination of the tour requirement could cost the Cuban government many millions of dollars in revenue and allow U.S. travelers to see Cuba in a far more independent way than before. Because the Cuban government controls virtually all the travel industry, American groups were required to stay in state hotels, travel on state buses, pay for the food through a state agency and use state tour guides to show them the sights.

Obama arrives in Havana on Sunday and is expected to call for the elimination of the nearly six-decade-old trade embargo on Cuba. Meanwhile, his administration has now eliminated a once-unimaginable number of trade and travel limits through executive action. More than a year after Obama and President Raul Castro announced the reestablishment of diplomatic relations, U.S. companies can now manufacture goods in Cuba, export to the Cuban government and fly regularly scheduled flights to Cuba. The Starwood hotel chain says it soon expects to get U.S. approval to manage hotels in Cuba.

The ban on international transactions that passed through the U.S. banking system for even a second had seriously hobbled Cuba’s ability to engage in international trade. Many banks have refused to do any business related to Cuba because of the fear of U.S. litigation, which has cost some banks many hundreds of millions of dollars in fines.

That had infuriated the Cuban government, which accused the U.S. of waging an economic war against Cuba around the world that overrode other countries’ laws allowing business with Cuba. With Cuba’s centrally planned, export-dependent economy constantly short of cash for goods ranging from paint to heavy machinery, any interference with its ability to do business had outsize impact on the island’s decaying infrastructure.

“They’re elevated it now to just about the single most important irritant of the larger embargo,” said Robert Muse, an attorney specializing in U.S. law on Cuba. “Cuba is like a coupon-clipping bargain shopper. They don’t have money to burn and they’re trying to stretch hard currencies as far as they can.”

However, rather than swiftly responding to Obama administration measures with matching openings in Cuba’s state-controlled economy, the Castro government has moved slowly enough to raise questions about whether there will be significant trade between the two countries before Obama leaves office.

Although the Obama administration has legalized exports of badly needed goods ranging from constructions materials to tractor parts, no such trade has begun. And while European cruise ships now make regular appearances in Havana harbor, U.S. lines have yet to receive Cuban approval months after getting the OK from the Treasury Department.

While Cuba’s lack of cash and labyrinthine bureaucracy are obstacles to any new business here, many experts believe that the Communist government is delaying trade with the U.S. in order to build pressure on Congress to do away with the embargo entirely.