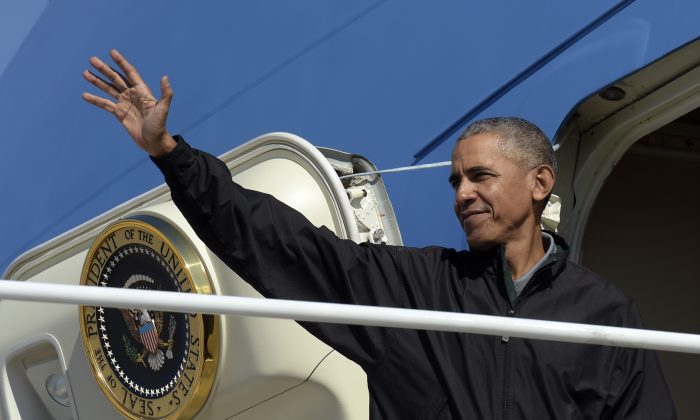 President Barack Obama waves from the top of the steps of Air Force One at Andrews Air Force Base in Md., on Oct. 23, 2016. (AP Photo/Susan Walsh)
Politics

WASHINGTON—Premiums will go up sharply next year under President Barack Obama’s health care law, and many consumers will be down to just one insurer, the administration confirmed Monday. That’s sure to stoke another “Obamacare” controversy days before a presidential election.

Before taxpayer-provided subsidies, premiums for a mid-level benchmark plan will increase an average of 25 percent across the 39 states served by the federally run online market, according to a report from the Department of Health and Human Services. Some states will see much bigger jumps, others less.

Moreover, about 1 in 5 consumers will only have plans from a single insurer to pick from, after major national carriers such as UnitedHealth Group, Humana and Aetna scaled back their roles.

“Consumers will be faced this year with not only big premium increases but also with a declining number of insurers participating, and that will lead to a tumultuous open enrollment period,” said Larry Levitt, who tracks the health care law for the nonpartisan Kaiser Family Foundation.

Republicans pounced on the numbers as a warning that insurance markets created by the 2010 health overhaul are teetering toward a “death spiral.” Sign-up season starts Nov. 1, about a week before national elections in which the GOP remains committed to a full repeal.

The new numbers aren’t too surprising, said Sen. Orrin Hatch, R-Utah, who chairs a committee that oversees the law. It “does little to dispel the notion we are seeing the law implode at the expense of middle-class families.”

HHS essentially confirmed state-by-state reports that have been coming in for months. Window shopping for plans and premiums is already available through HealthCare.gov.

Administration officials are stressing that subsidies provided under the law, which are designed to rise alongside premiums, will insulate most customers from sticker shock. They add that consumers who are willing to switch to cheaper plans will still be able to find bargains.

The vast majority of the more than 10 million customers who purchase through HealthCare.gov and its state-run counterparts do receive generous financial assistance. “Enrollment is concentrated among very low-income individuals who receive significant government subsidies to reduce premiums and cost-sharing,” said Caroline Pearson of the consulting firm Avalere Health

But an estimated 5 million to 7 million people are either not eligible for the income-based assistance, or they buy individual policies outside of the health law’s markets, where the subsidies are not available. The administration is urging the latter group to check out HealthCare.gov. The spike in premiums generally does not affect the employer-provided plans that cover most workers and their families.

In some states, the premium increases are striking. In Arizona, unsubsidized premiums for a hypothetical 27-year-old buying a benchmark “second-lowest cost silver plan” will jump by 116 percent, from $196 to $422, according to the administration report.

But HHS said if that hypothetical consumer has a fairly modest income, making $25,000 a year, the subsidies would cover $280 of the new premium, and the consumer would pay $142. Caveat: if the consumer is making $30,000 or $40,000 his or her subsidy would be significantly lower.

Dwindling choice is another issue.

The total number of HealthCare.gov insurers will drop from 232 this year to 167 in 2017, a loss of 28 percent. (Insurers are counted multiple times if they offer coverage in more than one state. So Aetna, for example, would count once in each state that it participated in.)

Switching insurers may not be simple for patients with chronic conditions.

While many carriers are offering a choice of plan designs, most use a single prescription formulary and physician network across all their products, explained Pearson. “So, enrollees may need to change doctors or drugs when they switch insurers,” she said.

Overall, it’s shaping up to be the most difficult sign-up season since HealthCare.gov launched in 2013 and the computer system froze up.

Enrollment has been lower than initially projected, and insurers say patients turned out to be sicker than expected. Moreover, a complex internal system to help stabilize premiums has not worked as hoped for.

Nonetheless Obama says the underlying structure of the law is sound, and current problems are only “growing pains.” The president has called for a government-sponsored “public option” insurance plan to compete with private companies.

Republicans are united in calling for complete repeal, but they have not spelled out how they would address the problems of the uninsured.

Democratic candidate Hillary Clinton has proposed an array of fixes, including sweetening the law’s subsidies and allowing more people to qualify for financial assistance.

The law makes carrying health insurance a legal obligation for most people, and prohibits insurers for turning away the sick. It offers subsidized private plans to people who don’t have coverage through their jobs, along with a state option to expand Medicaid for low-income people.

Largely as a result, the nation’s uninsured rate has dropped below 9 percent, a historically low level. More than 21 million people have gained coverage since the Affordable Care Act passed in 2010.