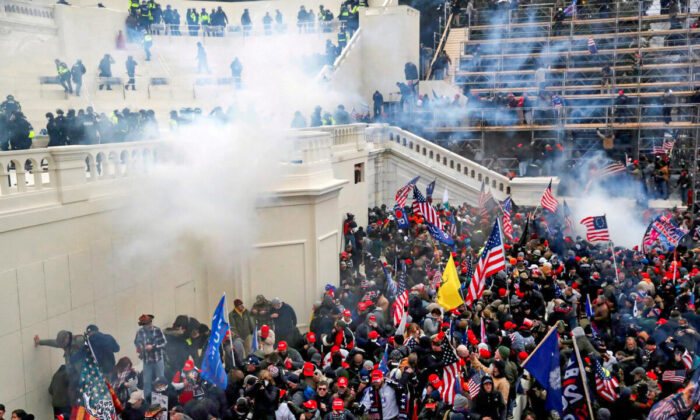 Police release tear gas into a crowd of demonstrators during clashes outside the U.S. Capitol in Washington on Jan. 6, 2021. (Shannon Stapleton/Reuters)
US News

A member of the Oath Keepers pleaded guilty on April 29 to two charges related to the breach of the U.S. Capitol on Jan. 6, 2021.

Brian Ulrich, 44, of Georgia, pleaded guilty in court to seditious conspiracy in connection to the breach and obstruction of an official proceeding.

Ulrich has agreed to cooperate with the government as it continues its investigation into the riot that interrupted Congress certifying the 2020 presidential election.

Ulrich now faces up to 40 years in prison and a fine of up to $500,000, though sentencing guidelines set the range of jail time at 63 months to 78 months, prosecutors said in the plea agreement.

No sentencing date has been set as of yet for Ulrich, the second Oath Keepers member to plead guilty to seditious conspiracy. Joshua James, 34, of Alabama, pleaded guilty in March.

Authorities say members and leaders of the Oath Keepers, a group comprised primarily of current and retired military members and law enforcement officers, planned and carried out a plan to interfere with the certification of the electoral votes from the election.

Many traveled from elsewhere to Washington to join the mob that breached the Capitol and caused lawmakers inside to huddle in fear.

Ulrich bought and brought with him radios, tactical gear, and a motorcycle helmet, among other gear, according to charging documents.

After Ulrich learned the Capitol had been breached on Jan. 6, he went to the building and entered at approximately 3:22 p.m. He left after law enforcement officers deployed chemical irritants and pushed people towards an exit.

Ulrich “intended to influence or affect the conduct of the United States government and to retaliate against the United States government,” his statement of offense says. “He accomplished this by intimidating and coercing government personnel who were participating in or supporting the congressional proceeding, including members of Congress, congressional staff, and law enforcement officers with the Capitol Police and Metropolitan Police Department.”

Federal investigators have launched a major investigation into the Capitol breach, and have arrested nearly 800 people in nearly all 50 states related to the incident. About 250 have pleaded guilty; only a handful have gone on trial, with juries convicting several and others being partially or fully acquitted in bench trials.

Stewart Rhodes, the Oath Keepers leader, and other people who were or are part of the group have not yet entered pleas or gone on trial.