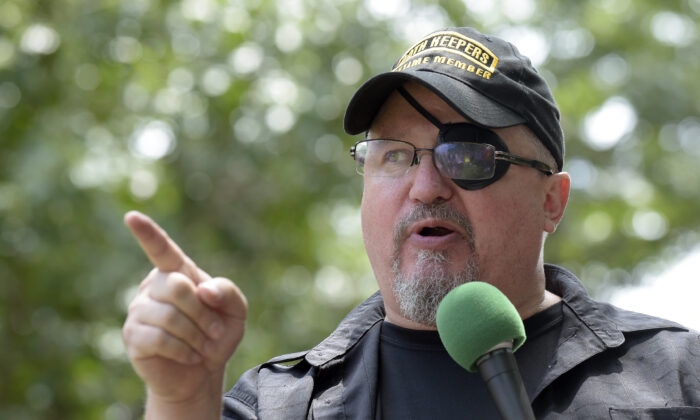 Elmer Stewart Rhodes III, founder the Oath Keepers—shown here at a 2017 rally— will remain in federal custody until his July trial on seditious conspiracy and other charges, a judge has ruled. (Susan Walsh/AP Photo)
US News

Oath Keepers founder Elmer Stewart Rhodes III will remain jailed until his trial on seditious conspiracy and other charges stemming from Jan. 6, 2021, at the U.S. Capitol, a federal judge ruled on Feb. 18, because Rhodes’s release would pose a danger to the community.

“I am convinced that there really are no combination of conditions that would ensure the safety of the community,” Mehta said in rejecting Rhodes’ motion for reconsideration of the detention order. The hearing was a continuation of a proceeding that began Feb. 16 when Mehta said he wasn’t yet prepared to rule on Rhodes’s request for pretrial release.

Magistrate Judge Kimberly Priest Johnson in Plano, Texas, ruled on Jan. 26 that Rhodes should be held in custody until trial.

Rhodes was arrested in January and charged along with 10 others with a conspiracy to bring a team of Oath Keepers to the U.S. Capitol on Jan. 6 with the intention of breaching the building and preventing the counting of Electoral College votes by Congress. The plan allegedly included a quick reaction force (QRF) that could be mobilized from Virginia if called upon to support the operation, according to prosecutors.

Rhodes earlier pleaded not guilty to all charges.

The judge cited the “conscious planning with respect to the bringing of weapons to the outskirts of the District of Columbia, although they were not apparently used.”

‘You Are Bringing an Arsenal’

“Whether those are characterized as lawful weapons or not, nevertheless you are bringing an arsenal on the outskirts of the District of Columbia, with the intention to use that arsenal if circumstances warranted,” the judge said. “That certainly enhances the danger that Mr. Rhodes presents, given that he was in charge of that operation.”

Mehta said Rhodes is accused of making a series of statements directly after the 2020 presidential election “that can be viewed as planning and preparation and intention to potentially use force on January 6th.”

“He refused to accept President Biden as the legitimate winner, saying, ‘We aren’t getting through this without a civil war,'” Mehta said. If former President Donald J. Trump were to invoke the Insurrection Act, Rhodes said the Oath Keepers would “be prepared to support him with boots on the ground nationwide,” Mehta said.

Rhodes was interviewed on Dec. 30 and said if Biden were to take office, “‘We will have to do a bloody, massively bloody revolution against him,'” according to Mehta.

An open letter posted online by Rhodes on Dec. 31 said that “we’ll have mission-critical gear right outside the District of Columbia, which I assume is a reference to the Quick Reaction Force,” Mehta said, “and we may have to quote, ‘take up arms in defense of our God-given liberty.'”

Mehta quoted from an online messenger discussion in which Rhodes allegedly said, “‘Be prepared for a major letdown the sixth to the eighth and get ready to do it ourselves,’ and that’s printed in all caps.”

Mehta said he would consider a request from defense attorney Phillip Linder of Dallas to keep Rhodes housed in Oklahoma City. Linder said that arrangement would allow Rhodes to be ready for trial by the July 11 start date.

Prosecutor Kathryn Leigh Rakoczy said she had no objection, adding that the government would prefer that Rhodes not be housed with his co-defendants.

Mehta said he will make a final decision on Linder’s request after consulting with the U.S. Marshals Service.