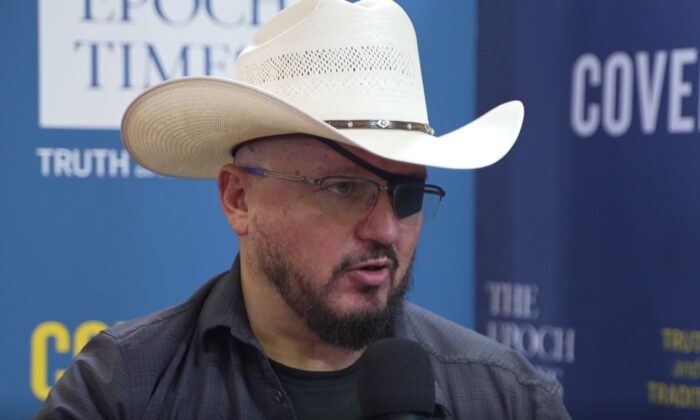 The founder of the Oath Keepers group pleaded not guilty to seditious conspiracy on Friday, several days after he was indicted by a federal grand jury in Washington.

Stewart Rhodes, 56, made a brief initial appearance in federal court in Plano, Texas. He was in the custody of U.S. Marshals, wearing handcuffs and leg irons.

Rhodes and 10 members of the Oath Keepers were charged this week for allegedly conspiring to attack the U.S. Capitol and prevent the certification of electoral votes from the 2020 presidential election.

Authorities said Rhodes, of Granbury, Texas, and certain co-conspirators “planned to stop the lawful transfer of presidential power by January 20, 2021.”

“They coordinated travel across the country to enter Washington, D.C., equipped themselves with a variety of weapons, donned combat and tactical gear, and were prepared to answer Rhodes’s call to take up arms at Rhodes’s direction,” according to court documents.

Rhodes did not enter the U.S. Capitol but some members of his group, which is primarily comprised of former and current law enforcement and military members, did, including some who were charged nearly a year ago, according to filings.

“He believes he will be found not guilty,” Bright said.

While the government plans to push for the court to keep Rhodes detained while he awaits trial, lawyers for the defendant will make the case that’s not necessary.

“He has no reason to flee. He has no passport. He has nowhere to go,” Bright said.

Rhodes faces up to 20 years in prison, as do others charged with seditious conspiracy.

Both Rhodes and Edward Vallejo, the only other person who had not previously been charged, were arrested on Thursday.

Vallejo, 63, also appeared Friday in a courtroom to face the charge.

He was ordered to appear in court again in Phoenix next week in a hearing that will feature arguments by his lawyers and prosecutors as to whether he should be held pending trial.

A lawyer for Vallejo indicated he planned to enter a not guilty plea at a future hearing while prosecutors confirmed the Department of Justice will ask for pretrial detention.

Rhodes, a former paratrooper in the U.S. Army who graduated from Yale Law School, told The Epoch Times last year that the Oath Keepers were in Washington on Jan. 6, 2021, “to protect speakers, events, and also rank and file Trump supporters were being attacked by Antifa when they try to walk back to their hotel or to the metro subway stops.”

“Now what happened is, unfortunately, some of our guys got swept up the same way 500 other Trump supporters got swept up in it and walked up the steps and through open doors that were already open, walk around inside, took some selfies, and walk back out. That’s all they did,” he claimed. “I’ve said that it was a mistake to go inside, but I don’t think it’s a crime.”

Joseph Hanneman, Roman Balmakov, and Reuters contributed to this report.